What happened to SNOW1?

Just like the other 13 snowy owls that SOAR worked with in 2012, SNOW1 came in starving. Seven of the 14 owls died before they got to SOAR’s facility. Five more died despite our best efforts at rehydrating, warming, and trying to reverse their severe starvation. Most had lost half their body weight. Two owls made it through. One of these had a dislocated elbow and cannot fly. He is now an ambassador for his kind as a SOAR education bird. One female, SNOW1, made it to release. This is her story.

SNOW1 was rescued from a farm field by Wright County Conservation Board staff in January 2012 and conservation board volunteers, the Rector family, drove her down to SOAR. She weighed 2.5 pounds. Female snowy owls should weigh between 4 and 4.5 pounds.  She was kept warm (we do not want starving birds to have to spend any of their precious energy trying to keep warm), tube fed high calorie fluids, and slowly hand fed easily digestible solid food. She was able to bounce back and started eating on her own! After a month in intensive care she was moved to a medium-sized flight pen to stretch her wings. As you can imagine, she was fairly weak and it took another good six weeks for her to get her muscles back into shape. At this point the snowy migration was over and with a few feather imperfections we decided to intermew (let her molt) her here at SOAR. Then several folks worked on a plan to be able to monitor her after release. 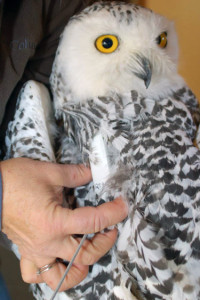 Bob Anderson, Raptor Resource Project, and Brett Mandernack, Eagle Valley Nature Preserve, stepped up to provide a transmitter and the expertise to gather and monitor the location data. SNOW1 made a quick trip to Decorah to have the transmitter attached with a backpack type of harness. She spent more time in SOAR’s 100-foot flight area to develop muscle and make sure the transmitter was comfortable and not interfering with any of her activities. She also had live prey practice and made easy work of this, when other food wasn’t provided.

We needed to decide when and where to release her. We consulted several experienced rehabilitators and thought that taking her further north and waiting for fall, when other snowys would be moving back in would be a good plan. Minnesota DNR agreed to allow transport to 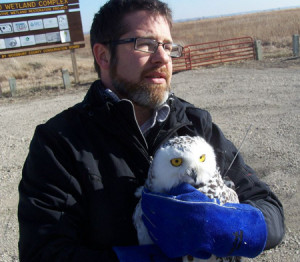 their state for release. As we were preparing to do this, snowy owls began arriving in Iowa. A look at habitat areas in western Iowa showed several large wetland and grassland areas that should hold good numbers of small mammal prey items.

SNOW1 was banded, thanks to the Iowa Department of Natural Resources (Iowa DNR), and ready for release. Matt Wetrich with Carroll County Conservation and Paul Roisen with Iowa Ornithologist Union released her at Woodbury County Conservation Board’s Owego Wetlands. She flew beautifully and was back in the wild. It was very exciting to get the first data locations to find that she had moved several miles north, then back south, in all traveling over 30 miles to finally spend a week in and around Onawa, Iowa.

Thanks to Paul Roisen for the photos below of the snowy after release! 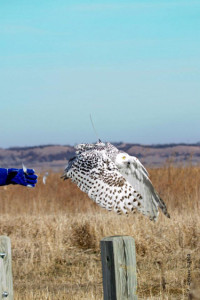 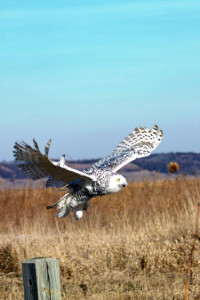 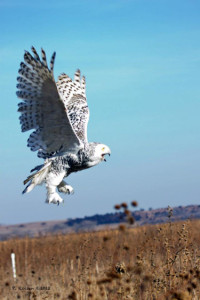 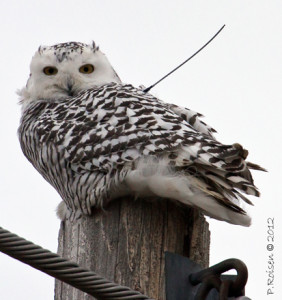 Paul Roisen captured this photo of SNOW1 atop a utility pole on 6 December 2012.

Before she left the Woodbury County area, Paul Roisen was able to locate SNOW1 and get a wonderful photo. She was perched on a power pole and looking in command of the situation after about a week in the wild. Then a report came from the Iowa Ornithologists Union birdline of a Snowy along Interstate 29 near Onawa. Fearing she had been hit by a car, Wildlife Lodge and Clinic volunteers were dispatched from Sioux City to try to find her and bring her in. Even with a good visual report and our transmitter data, they could not find her. An Iowa Department of Transportation staff person joined in the search and reported picking up a dead, unbanded snowy owl just a few miles north of Onawa on Interstate 29 a day or two earlier. This was not the best news. Snowys were choosing to use the area, but were not fairing well. Iowa DNR biologist, Doug Chafa, stationed near Onawa, joined in the search and got a visual on her spending time in the cloverleaf interchange between Interstate 29 and Iowa Highway 175! Not the spot I would have chosen for her, but she was flying, perching and preening. She was on her own.

We had several more transmitter locations for her around the Onawa area, which seemed to be good small mammal habitat; old hayfields, mowed filter strips, and stream buffers. Then after three weeks in the wild, no movement was detected from her transmitter and we feared the worst. As it would happen, Helen Harvey, a falconer from Sioux City, was en-route near Onawa. She made a thorough walking search of the area of SNOW1’s last signal with no luck. SNOW1 must be out of sight somewhere. Dean, Ray, and Warren from the Siouxland Metal Detecting and Archeology Club volunteered an afternoon with their equipment for a high-tech search with Helen. They found her thin body under the snow. She had not survived well in Iowa. Necropsy (animal autopsy) confirmed that she was not shot, did not have any broken bones, no aspergillosis, her stomach was empty and she had no body fat.

As with most good research, this has answered one question and brought many others to mind. Could we have done something differently? Somehow better prepared her to survive in the wild? Chosen a different release location or a different time of year? As with all of our wild patients we did the very best we could with SNOW1 for her to have a good second chance at being wild.

From band return data we know that many of our released birds survive well. A red-tailed hawk was recovered eight years after release, just seven miles from her release site. An arctic-phase great horned owl that was released in Carroll County in December was recovered more than six months later in Northern North Dakota. A bald eagle was picked up in Mills County with a fractured humerus that was repaired and released in Carroll County. This eagle was found three years after release, she had flown over 100 miles back to Mills County.

Is the landscape (habitat) in Iowa so different from the tundra that snowy owls cannot figure out how to catch prey that is different from the normal diet of lemmings and arctic voles? If the snowy owls were released in March, closer to the time they should be returning north, and released near the Canadian border, would they have better survival? Perhaps the snowy owls that come this far south are not good candidates to contribute to the wild population and should not be released?

The technology to track birds after release is amazing. Even though we all wanted SNOW1 to have a successful winter and migrate back to the arctic to nest, her information will be invaluable to help with future snowy owl rehabilitation. Snowy owls are a very interesting species and may be impacted by climate change. Knowledge about their movements and survival could be an important indicator of what may be happening in the arctic.

I am always amazed at how many people are willing to help wildlife in distress; it warms my heart and helps me to keep going even when things don’t work out as we would have hoped. A big thank you to everyone who helped with SNOW1’s rescue, recovery, release, and monitoring! She definitely left an impact on many people.