Watch this segment from Itasca Community TV (Minnesota) of Just Outdoors – Copper Bullets that talks about ballistics, shot placement, human and wildlife health, and three shooting demonstrations. (It’s not short, but is informative!)

The Case for Copper: Research uncovers problems with lead bullets for deer hunting

The photos in the slideshow below are from a trail camera focused on a copper muzzleloader slug-shot deer gut pile from January 2013. This nice safe gut pile was placed out in the open.

Can you identify who enjoyed a non-toxic meal? Encourage all hunters and anglers to hunt and fish lead-free!

What copper slugs do

Below are the photos from a white-tail deer that a friend of SOAR shot with a 12-gauge copper slug during the 2012 hunting season. The path of the slug was tracked… and the slug went through the near shoulder blade, through the body, through the opposite humerus, and lodged under the skin. Photo at left, you can see the slug just under the skin. The middle photo shows the hole made by the slug. The final photo is of the mushroomed slug. 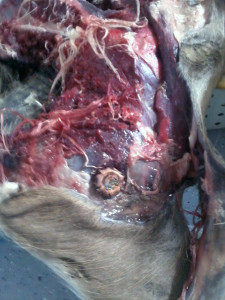 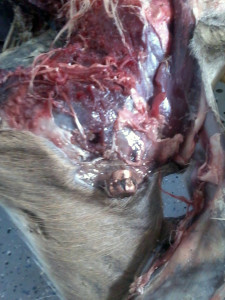 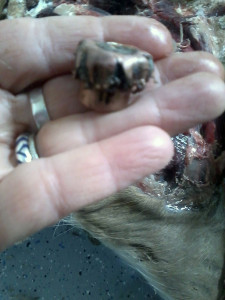 This video is produced by a Southern California hunter in 2011. Please note this video is 23 minutes long, but well worth it!