As of 15 March 2016, SOAR has admitted 14 bald eagles. Here are some sobering details about these eagles: 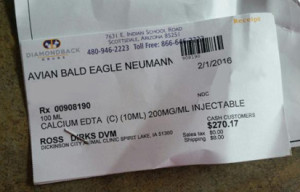 Out of the 14 eagles admitted, only one is still alive as of today (18 March 2016) and is one of the adult females that had an initial blood lead level of ‘HI’ on our diagnostic equipment.

Each one of these 14 eagles has had or will have a lead test, an x-ray (to identify any metallic opacities in the digestive tract or fractures), and receive chelation medication as needed. We recently purchased a re-agent kit for our in-house blood lead diagnostic equipment (over $400 for 50 tests and many eagles will be tested more than once) and calcium EDTA for chelation ($270)… plus the cost of x-rays and diagnostic laboratory liver lead tests. We continue with these protocols to add to our database of eagles and lead information. You can help us continue with this research and treatment of eagles and all our patients by donating to SOAR.

Another take-away from this is that it was likely that ‘Sibley’ eagle could have been part of a local nesting pair. How many of the seven adult females (six with fatal lead levels) that died had already laid eggs or would have nested?

We don’t know the full impact of lead toxicity on an eagle’s ability to avoid accidents, but think about the implications of people driving drunk and their impaired reaction times and poor decision-making skills, and then imagine how an eagle can fly with brain swelling and vision issues?

Lead is an absolutely horrible toxin that impacts all bodily functions. The prevention is simple.

Prevention. Ask your hunting and fishing friends to check out the non-toxic alternatives. Hunters and anglers have both had great success with these products. The more folks ask for non-toxic products… manufacturers will continue to improve product offerings.

Researchers from across the country have demonstrated that when raptors, particularly eagles and other avian scavengers, ingest lead ammunition or lead fishing tackle, their efficient digestive systems absorb the lead directly into the blood stream and that lead is circulated throughout the body. The body “sees” lead the same as it recognizes calcium. All bodies need calcium and the calcium is absorbed into bones and tissue. The very same thing happens when lead is in the body. The lead is absorbed just as if it was calcium and is stored in bones and tissue. A very small amount of lead ingested by an eagle will cause death — an amount no more than a grain of rice. Some of the research conducted can be found on our site here.