In Iowa, the barn owl is a state endangered species due to a lack of habitat for their prey and for nesting. Since 2012, 20 barn owl adults, hatchlings, and eggs have been admitted. Most admits have come from areas of Iowa with more grassland and nesting habitat (southern Iowa and the Loess Hills region of northwest Iowa). Iowa is also the northern limit of the species nesting range. Barn owls in Iowa likely migrate south to avoid the cold, harsh winters that limit access to prey, but are rare permanent residents.

Ideal nesting habitat would be a cavity in an old silver maple, sycamore, white oak, or in a wooden barn. While aesthetically pleasing, wooden barns don’t always survive through the ages and wildlife is very good at adapting! Church bell towers and grain bins have held barn owl nests recently.

SOAR has never admitted any young barn owls from a bell tower… but has rescued (or helped) hatchlings and eggs from both empty and full grain bins. In all three of the bin rescues, each farmer checked the bin before filling with corn, stirring the corn (which needs to be done to maintain seed health), and emptying the bin of corn. The simple act of farmers checking those bins saved many barn owls.

How do barn owls get inside a grain bin? Roof caps and access doors can get blown open or may have just enough gap for adult barn owls to enter.

In 2015 six hatchling barn owls were found before the farmer stirred the corn and were rescued. Another five were rescued in 2014 from an empty bin that a farmer checked prior to filling it last fall and found the five young.

The latest rescue (June 2016) was also from a full corn bin. With the farmer seeing adults coming and going from the bin, the Iowa DNR plan was to provide a nesting box attached to the bin and move the owl family. Just as plans were being put in place, the temps soared. In 90+ degree temps, the inside of full grain bin is a very steamy nest location and likely contributed to hatchling loss at our most recent barn owl rescue. Without the heat negatively impacting the situation, the plan to re-home the young owls should have worked. See patient admit from 13 June 2016. A nest box was placed on a post next to the grain bin as the same side as the opening the owls had been using. 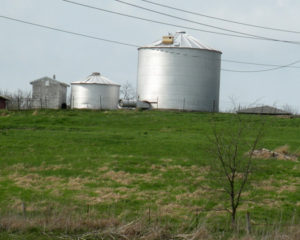 A barn owl nest box was successfully attached to the roof ladder on a grain bin in southern Iowa that had two successful nests in 2015, as reported by that landowner.

If you see the ‘ghost owl’ on your farm or acreage and have old barns or grain bins… check out those structures to see who / what might be sharing your property. Barn owls are incredible rodent control and should be welcomed! Two cautions, if you see barn owls, do not use rodenticide – let the owls take care of mouse and vole populations and great horned owls and raccoon will predate on barn owls so a sturdy barn owl nest box that keeps predators out would be a great addition!

Here are some box plans:

If you see barn owls, please note the day and exact location where the animal was seen. If you put up nest box(es) on your property, you can also keep track of and report its occupancy. Each and every report is important, as it helps us keep track of the health of the population and may even reveal previously unknown populations. Sighting and nesting information can be reported to the Iowa DNR Wildlife Diversity Program at 515-432-2823.