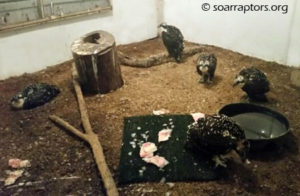 SOAR once again assisted the Iowa Department of Natural Resources Wildlife Diversity Program in collecting young osprey in northern Minnesota for hacking (a special kind of release) in Iowa. SOAR Education Director, Terrie, and SOAR Intern, Trevor were near Brainerd, MN on 11-12 July working with IDNR and the skilled lineman from Allete / Minnesota Power Company to retrieve young osprey from identified nests on utility structures or man-made nest platforms. Chicks are only collected from nests with two or more young. Read more about the project on our Osprey Reintroduction page. Five young osprey from Minnesota were brought back to SOAR for a complete physical, West Nile Virus vaccination and a few days of monitored feeding.

Storms on 16-17 July likely “helped” a young osprey fledge too soon from a nest on a cell tower near Palo, Iowa. A concerned citizen that had been photographing the nest (from a respectful distance) checked the area below the nest on the 17th and found one of the young from that nest. After contact with The RARE Group in Iowa City and with Pat Schlarbaum with Iowa DNR, it was decided to not attempt a re-nesting as it may cause the other two young to also fledge prematurely. This Palo bird will be hacked with the ones from Minnesota. 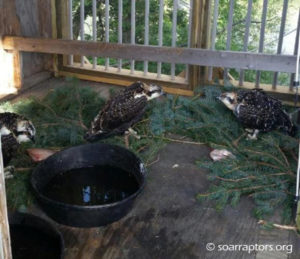 The Palo and two Minnesota ospreys were placed in the hack tower on Clear Lake, Iowa on 22 July. Volunteers (thanks to Ron and his crew) fed the youngsters chunks of fish and kept the water pans freshened. The young osprey need to be in the tower for a few days for the location to become home. These days of relaxing, eating, and hopping about the logs and perches inside the tower help strengthen muscles for that maiden flight. The doors on this tower were opened on 29 July 2016 and Pat and volunteers reported that within 15 minutes of the gates being open, Palo was on the wing!

The other three young Minnesota ospreys were placed in the hack tower at Swan Lake State Park on 26 July. SOAR volunteers are providing care for these three. Gates on this tower may be opened on 1 August 2016. **Update… torrential rains in the area have pushed the gate opening to Tuesday, 2 August. Yes, the gates on the Swan Lake State Park hack tower were opened the morning of 2 August and already one of the young osprey has taken flight. On 4 August, Kay noted that all three swan lake osprey are flying!

Since 1997, biologists, raptor rehabilitators, and other conservation groups have worked to establish a breeding / nesting population of osprey in Iowa. In 2014, 21 osprey pair nested with 15 successful nests producing 30 young. In 2015, there were 22 osprey nest attempts that were known / reported with 18 successful nests that produced 38 young.