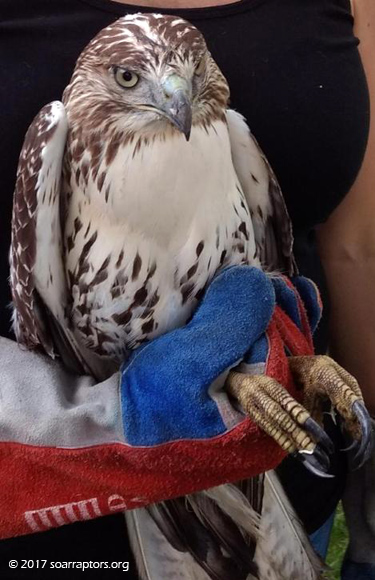 Here’s another preventable human hazard for raptors… just say ‘no’ to using rodenticide! While rodenticide certainly does kill rodents, it also one of those toxins that causes secondary poisoning. In other words, rodenticides kill unintended animals.

Rodenticides are made from blood thinner. The secondary poisoning happens when another eats a rodent that ate poison made from coumarin (first generation) and or now made from brodifacoum and bromdiolone. The second generation anticoagulant is 100-1000 more potent. These poisons function by interrupting the vitamin K cycle leading to the animal’s inability to make clotting factors in the liver.

The juvenile red-tailed hawk pictured with this post is suspected of eating a poisoned rodent. This is not pretty… the hawk is bleeding internally, is too weak to stand, and as of this picture could not keep down fluids. Vitamin K has been administered to help the blood clot.

No to rodenticides. Use snap-traps if you must control rodent populations.

Learn more with these links: