On October 30, 2017, one of the Dallas County Conservation Board staff came across an injured hawk. It was still alive but unable to fly due to a broken wing. The bird was transported to a SOAR volunteer and identified as a juvenile red-tailed hawk. The cause of its injury; this bird had been shot.

Why would someone shoot a hawk? Some people believe that hawks are eating our game birds namely pheasant, quail, and partridge. Others have had their domestic birds, mostly free-range chickens, preyed upon by a hawk or owl. While this may happen, it is not as common as some would have you believe. This is my attempt at creating a better informed public. Here are some basic facts:

First, it is against the law to shoot any bird that you do not have a permit to hunt. The Migratory Bird Treaty Act passed in 1918, made it illegal to shoot any bird or possess feathers, nests, or eggs. An initial exemption to this law was hawks and owls. The perception was these raptors were detrimental to game birds and therefore competed with human hunting. 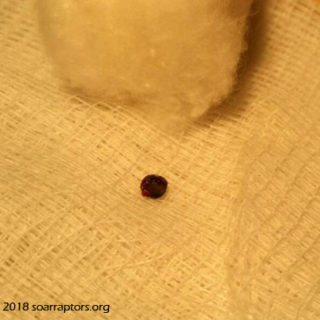 A #2 piece of lead shot after being removed from a wing of a red-tailed hawk admitted from Ida County December 2017.

The amendment to include birds of prey didn’t take place until 1972. This delay in protecting hawks and owls created a concept known as entrenched institutional memory. You will often hear the adage, “Well that’s the way we have always done it.” Each year, SOAR admits raptors and other birds as a result of illegal shooting. Old ideas take time to change. Even one illegally shot is too many.

Second, many outdoorsmen claim that they have actually seen a hawk kill a pheasant. I went to the North American Falconry Meet when it was in Waverly, Iowa and went with some falconers who were hunting with red-tailed hawks. I asked if we were hunting pheasants and they laughed at me. “The red-tail is the B-52 of the raptor world. If you are hunting pheasants you need a falcon.” I was shocked. Red-tailed hawks are eating small mammals, rabbits, and occasionally birds. They are a “sit and watch predator,” not an active moving one.

I have continued to talk with people who have seen a hawk take a pheasant and have found a common thread that one might not think important. There was snow on the ground. Why does this make a difference? Hawks are opportunists; they search for the weak and old. If a pheasant is crippled by a poor shot it can live for several weeks. It’s unable to fly but can still walk and forage for food like any other pheasant. Opening day of pheasant season begins in late October and soon after we have our first snow of winter. Snowfall makes it more difficult for the pheasant to forage and harder for it to camouflage. In either case the hawk has the advantage of taking the injured pheasant because it was unable to fly.

Third, red-tailed hawk migration starts about mid-October and continues until late November. The peak of this migration corresponds with the opening weekend of pheasant season. Most hunters are outdoors year around but some don’t take note of the totality of what birds are in the environment in larger numbers. To an untrained eye, lots of hawks in the sky and not a lot of pheasants on the ground equals hawks are eating all of our upland game birds. By far the biggest impact on pheasant numbers are a cold, wet spring when eggs and chicks have high mortality.

Finally, the greatest factor affecting all upland bird numbers is loss of habitat. By planting native grasses, forbs, and trees we not only help the birds we put on our table but also song birds, insects, and other wildlife including the red-tailed hawk. Maybe with a little education we can better inform the public and share the land and skies with our fellow hunters.