Bald eagles are a most striking and stately bird. The bright white head and tail can show up along tree lines, roosts, and glisten amidst a dense fog. Even the bald eagle ambassadors at SOAR give us these striking images! Several eagle ambassadors have been at SOAR since they were juveniles and we can see their aging process in photos. Liberty was admitted December 2001 — as a hatch-year 2001 bird. Spirit was admitted in March of 2000 as a hatch-year 1999 bird.

The adult bald eagle with the white head and tail is easy to identify! But, what about those big brownish colored birds? Some are dark, some are speckled, and some just look bigger than an eagle. These birds are considered ‘immature’ or ‘juvenile’ eagles until they have reached their adult coloration or plumage. The layers of feathers that cover a bird, the pattern, color, and arrangement of those feathers are the bird’s ‘plumage.’ 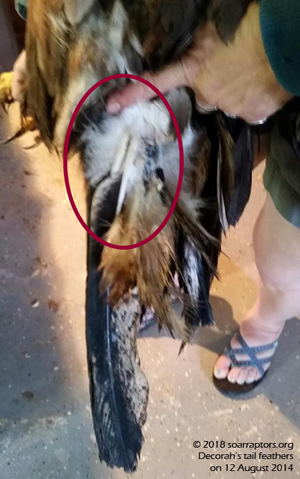 The plumages are acquired by feather ‘molts’ that begin each spring and are completed by late fall and will carry the bird through the winter months. Feathers are similar to our own hair and nail structure and are made of keratin (a protein). If the feathers (or our hair) become damaged or worn, they need to be replaced. Hormones and seasonal changes trigger feather molts. Also, if a bird loses a complete feather, it will immediately be replaced without waiting for their molting period. [I think this is what happened to our June 2014 bald eagle admit from Decorah that had damage to tail feathers.] Feathers need to be in the best shape possible for them to be in top flying condition. Annual molts must occur over a long period of time and in a pattern so that they can continue to fly and hunt for food. This is quite different from waterfowl that will molt their feathers all at once and are left flightless for a long period of time. Understanding basic molt patterns assist in identification of a species, as well as determining an age.

Can you tell an eagle’s age from their color?

The aging of bald eagles is not a clear-cut science. Even after all the years of study, there is no reliable way to get an exact age just by looking at plumage color. Health, diet, and injury can play a strategic part in feathers, as well. Some eagles that receive injury may become a year behind in their plumage changes, may speed up color change, and can look different than their same-age siblings. Once they reach maturity and become an adult, it is almost impossible to attribute an ‘age’ to a wild bald eagle.

Raise your hand if you’ve heard Kay say, “Thora is somewhere between 12 and 38 years old.” Thora is one of our education eagles that was admitted as an adult to SOAR. Thora had her adult plumage in 2011 when she was admitted… so she was at least five then and in 2018 that was seven years ago. So at the least she could be 12. The oldest eagle with a band return was reported to be 38 years old.

At SOAR, our eagles and research database categorizes our bald eagle admits into three groups at time of admit: < 1 year (a hatch-year eagle), immature / juvenile aged 1-5 years, and adults > 5 years old. It’s important for us to be able to use plumage to categorize age.

As young, immature eagles age, their eyes (iris) will begin to lighten, going from a dark brown to yellow and their beak changes from a charcoal black to a brilliant yellow. These changes occur over years of time, sometimes we overlook the younger generations until they become mature with their stately appearance.

So, just how can you possibly get an idea of how old those eagles might be?

The first four weeks, young eagles are covered in fluffy white down. Yes, this is N2 near the Decorah Trout Hatchery, Decorah, Iowa. It is on good authority that the eaglet D20 is in the foreground.

The basic black and brown plumage appears at about five weeks of age. This is the same nest as above, just older eaglets! 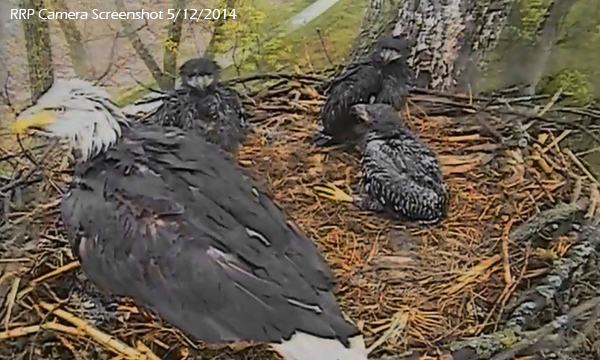 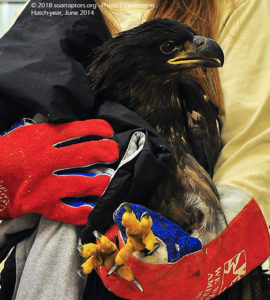 At around ten weeks of age, young eagles are fully feathered. Note the dark eyes and charcoal color beak. 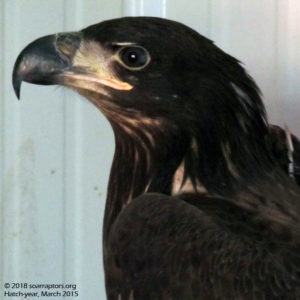 A hatch-year bird (HY) will keep its chocolate brown plumage through the winter until spring. Many times, this age of eagle can easily be confused with the golden eagle. 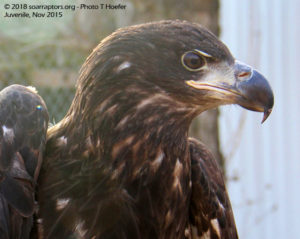 In their second year (older than hatch-year but not two years), the plumage begins to start mottling with more white speckling appearing throughout the body. The eyes and beak show a very slight lightening of color. 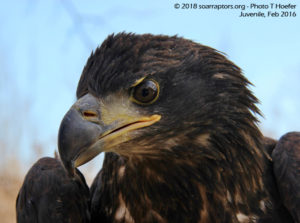 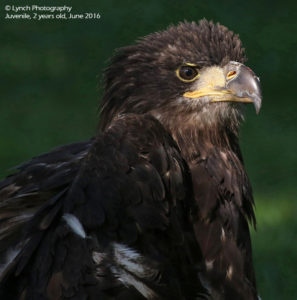 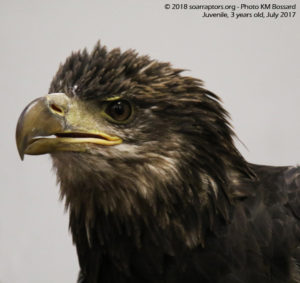 Juvenile eagles in their 3rd year have a noticeable ‘belly band’ and more white mottling. The beak and eyes are beginning to show some notable fading. 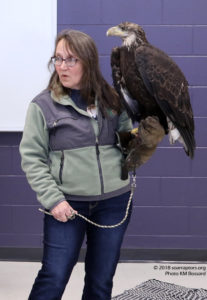 Decorah at the 2018 Indianola Sustainability Fair

During an eagle’s 4th year, the head and tail feathers are showing the characteristic color and look of the adult bald eagle. Yellow is beginning to appear on the beak with eyes changing to a much lighter brown to soft yellow.

Most eagles molt into their white head and tail feathers during their 5th year. Some may still show some blotches of brown or grey as they each will molt differently. The beak becomes vibrant yellow and the eyes will have changed to a pale yellow.

Visit this Google Photo Album from our friends at GladysBlackEagle.org showing mostly wild eagles and their different plumages! These photos are not all close-ups so you can see speckling, belly bands, and white mottling.