The hatch-year 2019 bald eagles in the nursery have moved to the 20’x60’ flight pen! D33, DN9, Allamakee, and Calmar moved on 23 July and can now “start their engines” so to speak. This flight pen is large enough to allow for those necessary short flights that build muscle, stamina, and skill in landing. (Would this be like having a learner’s permit to drive a car?) 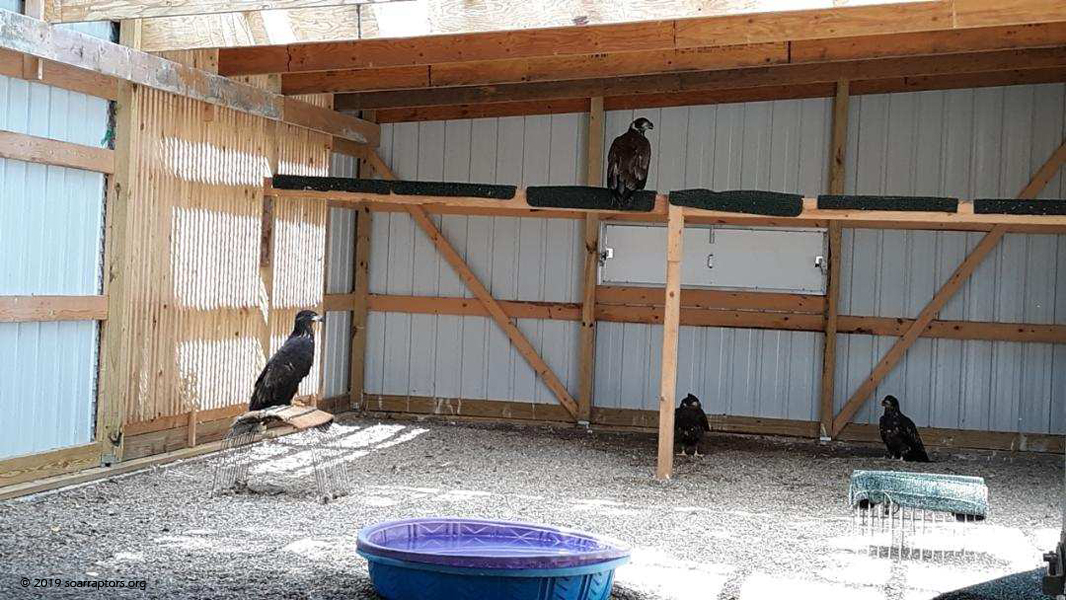 Moving birds from one flight pen to another is the time for getting updated weights. D33 is holding steady at 11 pounds and her beak depth has not increased (3.35 cm). DN9 has gained ½ pound (up to 9.25 pounds) and HER beak depth is now in the “female” group at 3.35 cm. Both Allamakee and Calmar are boys! Remember that children to not grow at the same rate and speed. Learn about beak depth measurement to determine gender.

D33 and DN9 got a touch-up on their polish – in case anyone was curious, the color they are sporting is Revlon 590: Trendy. You know a pedi needs a touch up every so often!

In the photos from this week, DN9 has white patches on the sides of her neck. White on DN9 is because of the gnat bites and her scratching she lost feathers. She is all healed, but now regrowing down and feathers. So, this handy identification marker is going to disappear as the feathers grow in.

No change of scenery yet for D32. Kay reports looks good and that she saw him move toes on the right foot. That’s positive.