Bald eagle populations have increased dramatically over the past 30 years across North America. The Upper Midwest, which houses one of the densest populations of bald eagles in North America, has experienced dramatic increases in the number of breeding and wintering eagles since the 1970s.  For example, In 2014, more than 30,000 eagles were recorded by the Army Corp of Engineers winter count at 16 lock and dam locations on the Upper Mississippi. As populations of bald eagles have increased so have conflicts with human activities, especially wind energy development and collision with aircraft.  Of particular interest in Fish & Wildlife Service Region 3 are the origins of eagles wintering along the Upper Mississippi, their seasonal migration pathways, their local movements, and a general understanding of the ways that development – wind turbines, power lines, and disturbance – may impact these increasing numbers of eagles. Information about these issues is important because the USFWS is charged with issuing permits for limited take and disturbance to eagles. Permitting such activities requires a reasonable understanding of potential impacts to eagles and thus, an understanding of the basics of local and regional eagle biology.

Researchers report that in late September 2019, only a few telemetry units remain so the group is winding down on telemetry deployment. Next, researchers will focus on data analysis.

An adult eagle was admitted to SOAR on 9 July 2017 with the same style telemetry unit as were fitted for two rehabilitated eagles released (see below). This eagle from Oklahoma, read her rehab story here, is part of an Oklahoma Study with many of the same researchers as working on the Midwest Telemetry Study. The telemetry units used for both studies weigh between 60-70 grams and could be compared to you or I wearing clothes! A backpack style harness of Teflon ribbon holds the telemetry unit on the eagle. 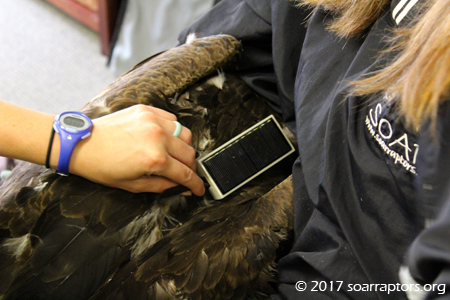 The telemetry unit is attached to a backpack style harness of Teflon ribbon.

Listen to this “In-Depth” Radio segment with Dr Bob Leonard from KNIA / KLRS Radio in Knoxville, Iowa as he talks with SOAR friend Marla, Kay Neumann, and Sara Schmuecker about the eagle release on 27 September 2017. Please note the info Sara shares about the importance of the telemetry research being conducted.

The Oklahoma bald eagle is currently in Saskatchewan Province in Canada. This bald eagle winters on the Oklahoma-Texas border!

Two bald eagles ready for release were fit with current technology telemetry units on 28 February 2017. These eagles are now part of an eagle tracking study that began in 2014, being jointly conducted with the US Fish & Wildlife Service Moline Field Office, the US Geological Survey, and West Virginia University. The researchers are looking at migration and movement patterns, specifically how and when these eagles use upland areas away from the river, of both Midwest eagles and eagles wintering along the Mississippi River.

These new GPS-enabled units utilize cell tower networks to download customized and detailed data on each eagle’s movement. As of early December 2016, 30 eagles were being tracked. Open this PDF (772 KB) to see movement of some of the eagles with telemetry units as of 4 December 2016.

Thanks to Polk County Conservation for documenting this research.

Releases are always special as so many patients never get to that point. These eagles were released in a private thank-you ceremony for SOAR rescuers and transporters in NE Iowa. My heartfelt thank you to Nick S., Brian M., Brian R., Gary S., Tracy B., and so many more for their help and dedication to our feathered friends. Thanks to landowner Bob S. for allowing us to meet and release on his property. ~Linette 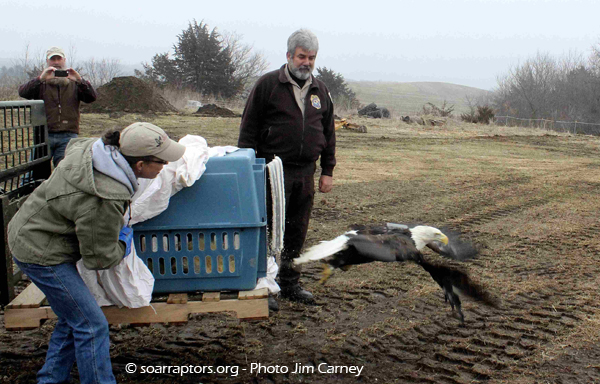 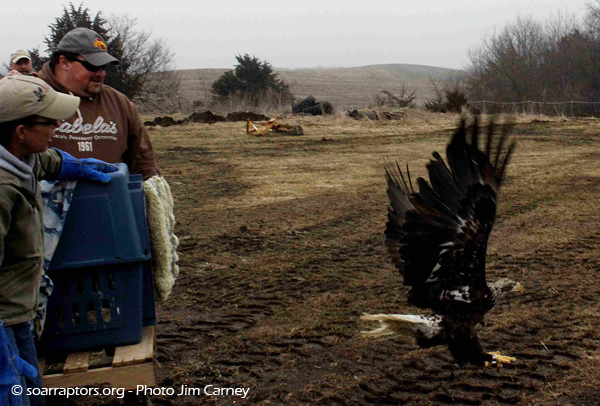 On 5 October 2017, Highlandville was hanging out in Allamakee County along IA-76 south of Dorchester.

SOAR received word from USFWS that the bald eagle Highlandville was found dead on the side of the road in Clayton County, Iowa. While the reality of his death is not pleasant, and without the telemetry unit and federal band we would never have known his fate. We also would not have had the joy of watching his travels on the map. SOAR hopes that his data points collected for the last 8.5 months add to the Midwest Telemetry Study.