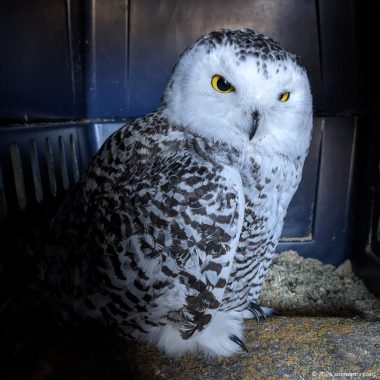 That said, sometimes there is reason to approach. This snowy owl admitted on 6 December 2021 is one of those cases.

Here’s the backstory as told by the rescuers.

On 5 December, pheasant hunters noticed a bird sitting in the field and took several pictures to identify. The last picture they took was of this owl trying to fly, but finders reported only ground-hopping. These hunters got this information to folks who knew staff at a nearby county conservation board (CCB). One of the staff just happened to know a farmer very near where the hunters reported seeing this owl. This CCB staff checked in with the farmer on the morning of the 6th. The farmer said this snowy spent the night in his yard, some 70-feet from his house. CCB staff went to his farm to assess the bird from a distance. This owl did not move when approached and was easily and safely caught and taken to SOAR.

This snowy’s initial exam did not reveal any injuries, BUT the owl only weighed 2.4 pounds. A snowy owl should be in the 4-4.5 pound range. This owl didn’t have the energy to fly, let alone hunt. It’s never good when an admit has lost roughly half their body weight. High calorie fluids and small bits of quail were offered on day one.

Why do snowy owls end up so far south of their summer / breeding territory? Young of the year snowy owls do disperse from their nest site. Adults may push the young south. There could be a food shortage up north adding to the owls moving south.

Thanks to the hunters for reporting their concern and to the county conservation board staff for assessing the situation and bringing the owl in for help.