SOAR began gathering data in 2004 on the admissions of bald eagles to wildlife rehabilitators in Iowa. Eagle data includes: date of admission, circumstance of admission, gender, age – adult/juvenile determined by plummage, county found, lead levels from blood sample or liver or bone biopsy, and if euthanized, died, or released.

SOAR has also looked for the source of the lead, as able, through x-ray, CT scan, or fluoroscope image of eagles and other raptors that show symptoms of lead, and deer carcass and packaged venison. SOAR has documented eagles and other scavengers feeding on carcasses.

Signs of toxic lead levels in raptors include ataxia (muscle weakness and an inability to control voluntary muscle movement due to central nervous system being affected), lime-green feces, vomiting, seizures, partial or full paralysis of the wings and legs, impaired vision, and death. 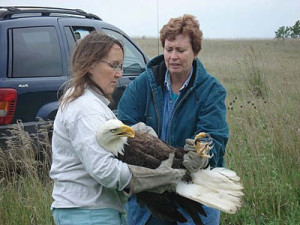 In 2006, this bird came in from Mills County with a band. She was banded as nestling in Shell, Missouri in 1986!  She had a fractured humerus — which Ross Dirks, DVM, at Dickinson County Animal Clinic, Spirit Lake pinned. The wing healed nicely, she spent eight weeks in intensive care. After one month in the 100 foot flight she is ready to go. Kathy Hodges releases her on our farm in honor/memory of her son Drew, who had just died from cancer.

In March 2009 a call from the warden in Mills County, has a dead eagle with a band — yes our baby. Liver biopsy showed lead poisoning as cause of death. She was 23 years old and in perfect feather.

What did she likely eat in February or March 2009? Yep, she probably had been feeding on a lead-shot deer gut pile or a deer that had been shot with a lead slug and not found by the hunter.

How could this death have been prevented? If the hunter had used a non-lead slug to harvest that deer there would have been no lead shrapnel left behind to impact a non-target species.

How do we test for lead?

Testing for lead can be done two ways; blood samples and liver or bone samples. While the bird is still alive (antemortem), blood samples can be taken and analyzed in-house using our LeadCare II diagnostic machine. Liver and bone biopsies are completed only after the bird dies (postmortem). Test results can be expressed in parts-per-million (ppm) or micrograms per deciliter (µg/dL). For reference, 0.1 ppm = 10 µg/dL.

Blood lead level test results and what they mean:

Liver biopsy results and what they mean:

Exposure to lead can cause the animal to be impaired and not be able to catch prey, avoid collisions, etc. so exposure levels are still potentially lethal indirectly.

The data and what we learned is published online in the Journal of Fish and Wildlife Management!

Thanks need to go to many people… Jodeane (at the Macbride Raptor Project then, now at The RARE Group), Terese and Dr Lori and volunteers with Black Hawk Wildlife Rehabilitation Project, Dr Z and staff at the Wildlife Care Clinic, SOAR volunteers for rescuing, transporting, collecting data, treating, and all that goes in to helping sick and injured eagles! Data collection is likely the least favorite activity in all of this… but oh so important!  Thanks also to Dr Z, Taylor, and Adam for help with statistics and organization. Without the data, this paper could not have been published.

What did the data tell us about the lead exposure to bald eagles in Iowa? 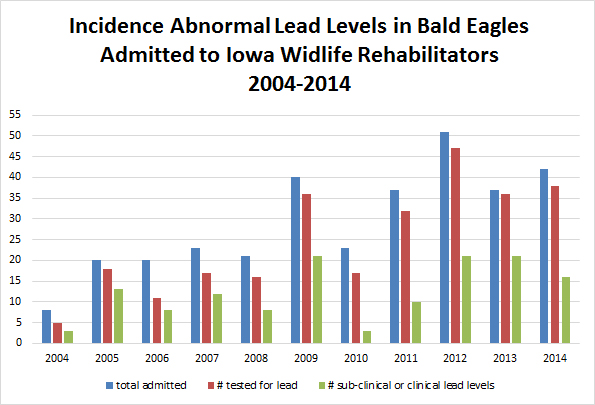 Beginning in 2004, wildlife rehabilitators admitting bald eagles began testing for lead levels in blood (alive) or in bone (if dead) and taking x-rays to look for ingested lead. An abnormal lead level is above 0.2 ppm as a blood lead level or above 2.0 ppm as a liver lead level.

In 2014, 42 eagles were admitted across the state. Of those 42, 38 were tested for lead levels and 16 of those tested showed abnormal lead levels. 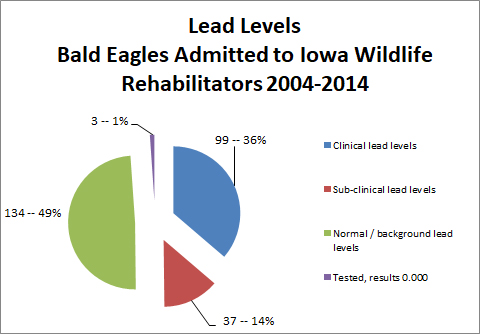 Yes, this is an eagle feeding station — SOAR salvaged roadkill deer (with the necessary permit from an Iowa DNR conservation officer to pick up) and carp and placed in a field in Carroll County, along with a motion-activated trail camera. The dates on the photos are correct, but the time stamp is wrong. SOAR is, of course, very careful to examine carcasses to make sure there is no chance of lead. Please do not use butcher scraps from lead-shot animals or leave animals shot with any type of lead ammunition out for predators or scavengers to eat.

The Peregrine Fund hosted this conference in Boise, Idaho with the goal of the conference to promote a better understanding of spent lead ammunition as a source of lead exposure and to reduce its effect on wildlife and humans.

SOAR received an Iowa Resource Enhancement and Protection – Conservation Education Program (REAP-CEP) grant to form a Lead in the Environment Advisory Group. This Advisory Group would bring together the stakeholders involved in the issue of lead in ammunition and tackle. Through meetings, focus groups, and discussion a plan of action to address this issue was formulated.