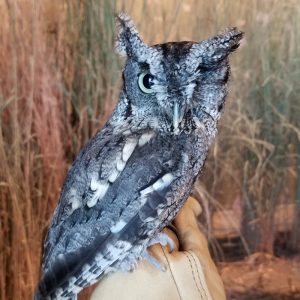 Ash is a grey-phase screech owl, admitted to us as in February 2017 from the Sioux City area. He was found along the side of a gravel road, hunkered. We also suspect that this owl was hit by a vehicle as there was an eye injury and the upper and lower mandibles (beak) no longer line up as they should. Ash is a species of tree that a screech owl might nest in, but is also a shade of grey! Photo T Hoefer.