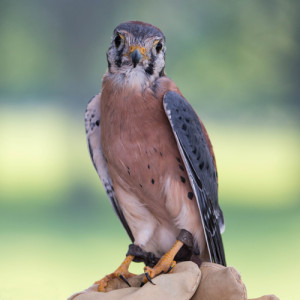 Our male kestrel, Blaze, is a human imprint. Someone found him as a very young chick (hatched 2006) and did not realize they could not legally raise him nor did they know the imprinting process that birds go through. He saw humans during the critical nestling phase and no adult kestrels. He thinks he is a person or we are all kestrels! :/ He does not know how to behave around other kestrels and shows no fear of things he would need to avoid to survive in the wild, i.e. cats, dogs, people, etc. He does not have the kestrel social skills to hold a territory and form a wild pair bond with a female kestrel, so would not be a reproductive benefit to the wild population. This story highlights the importance of our non-imprinted education birds being able to act as foster parents and models for incoming young birds. Photo Brian Reed.

Life history of the American kestrel from Cornell Lab of Ornithology