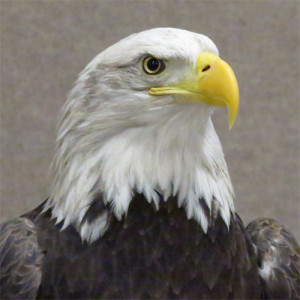 Thora was admitted in early 2011 as a very sick bird. She had no physical injuries but very underweight. A blood test revealed she had toxic lead levels in her body. She was rehydrated, fed, and received three weeks of chelation therapy to remove the lead from her body. Learn more about how lead impacts raptors here. While she gained weight and grew stronger, her vision was still impaired. After a test in the flight pen confirmed that she couldn’t see well enough to fly with confidence, she was transferred to the education permit. Thora is named in honor of a friend who died in 2009 in Afghanistan working with a government contractor. Photo KM Bossard.

Life history of the bald eagle from Cornell Lab or Ornithology