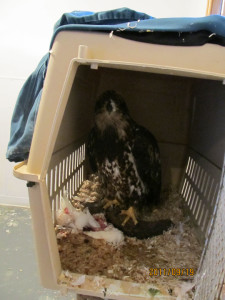 A juvenile female bald eagle was hit on a road in the Decorah area while “dining” on roadkill raccoon. A passing car called the Raptor Resource Project (and waited for help to arrive) and Bob rescued the eagle (one of the folks from the car drove Bob’s). Unfortunately, the bird yacked up her last meal and a bit of blood all over Bob and his car. She could have some internal injuries.

After a quick call to SOAR, Bob discovered that Kay was going to be in NE Iowa the next day so could transfer the eagle to her. They agreed she (by size of beak and feet) was likely a two-year-old bird, having gone through one complete molt. She does not have any compound fractures, but is also not putting full weight on her left foot. She is not underweight and is feisty. Her first night at SOAR will be a quiet one with food and fluids offered.

21 October 2011
In preparation for release tomorrow, this eagle was weighed (10.75 lbs!) and USFWS band put on before loading into the carry crate. See photos below.

12 October 2011
This eagle's release is planned for Saturday, 22 October, 11:00 a.m. at Phelps Park in Decorah. If all goes as hoped, the true heroes of this bird's ordeal (the father and son who kept her safe alongside the road until Bob with RRP arrived) will be in attendance.

10 October 2011
She was messing with a fish head today (yum?). You can barely tell that she is slightly favoring one leg. She is going back and forth in the flight pen from both high perches.

3 October 2011
Her blood lead level is down to 0.105 ppm or 10.5 µg/dL and her mouth lining is pink. She's not acting like she is having any trouble with her vision. There is definite improvement in her leg... she lands without hesitation, but when perched, she lists to her 'good side.' Her appetite is not typical eagle yet and was wormed for tapeworms just in case. She has been transferred to the 100' flight pen. She immediately flew to the middle perch and then to the high perch. Hopefully moving and expending more energy will increase her appetite. Now she moves into the physical therapy phase of rehabilitation.

30 September 2011
Surprise! During morning chores, this juvie was not on the ground where last seen but was perched on the top of the inner door to the ICU room. Cut-up food and a whole piece of food was left for her. Checked back in later to find the cup-up pieces eaten. Progress.

28 September 2011
She is still not eating on her own. She has been started on an anti-fungal / antibiotic to address any possible issues in her gut and has a few days left of this regimen. For now, she continues to be on a "chicken soup" diet being hand-fed with forceps. She is still limping -- usually a good four weeks with a leg injury before a bird will again use that leg normally.

23 September 2011
This juvie is still not eating on her own... but is eating when fed twice each day. Food in and poo out -- however her mutes are green which indicates she still has lead in her system. When another blood sample is drawn to measure her blood lead level, don't be alarmed if the level goes up. Think of it like reorganizing and cleaning a room - it gets worse before it gets better.

Her mouth lining is still pale indicating she is likely anemic. Beef heart is on the menu later today. The dark red meat will give her plenty of iron.

Her eyesight appears to be getting better as she is taking food from both sides of her beak and she has become quite interested in a new patient in the ICU, peering through the air vents at this accipiter de-feathering a meal. She is putting more weight on her left leg, but still not an even weight distribution.

She will be moved to the 20'x20' intensive care room today. There she can have room to stretch her wings, move from perch to perch, and have a bigger bath pan -- but still be by herself and not be able to move too much.

19 September 2011
This juvenile was not "fussed with" over the weekend, just offered food twice each day. She is near the three education bald eagles at SOAR and can hear them and has been calling back to them. No blood has been seen in her mouth or mutes (fancy word for bird poo). The juvie weighs in at 10.5 lbs - definitely a female. Kay is now leaning toward this bird being three because of the yellow coming on in her eyes and cere.

Visits to the doctor are often good news, bad news. Good news is that she has no fractures, just badly bruised. The not so good news is that her blood lead level (BLL) was at 0.119 ppm or 11.9 µg/dL. This indicates low lead exposure. When, from what? When is easier - sometime in the last 10 days she ate a small amount of lead along with her food. Small meaning not enough to kill her but enough to impair her. Once any animal ingests lead, it takes about two weeks for the body to do something with the toxin - either absorb it into bones and organs and/or excrete it. We'll never know what the lead source was.

Her BLL is not high enough to need chelation therapy. There are side effects to chelation that you have to weigh into the decision and with SOAR's experience with lead-affected eagles, with this BLL her body will rid itself of the toxin without additional therapies.

18 September 2011
This "juvie" does have some vision impairment. This was noticed while feeding her with forceps... the food had to placed in a certain spot for her to see and then snatch. 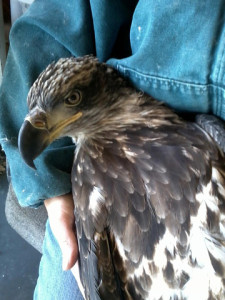 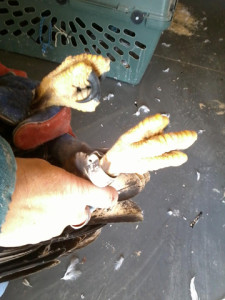 22 October 2011 – Over 140 folks, including Raptor Resource Project (RRP) supporters from three states, joined SOAR Executive Director Kay Neumann and volunteers at Phelps Park in Decorah to release a juvenile female bald eagle that was rescued near the town a short five weeks earlier. All the good Samaritans involved in the rescue, Winnishiek County Deputy Leon Bohr, reporting party Dr. Paul Ostlie, Bob Anderson with RRP, and Dean and Mike Loney, were also present. Mike Loney had the honor of releasing this juvenile.