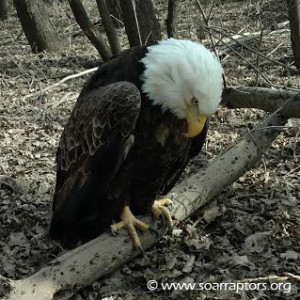 A landowner out doing fieldwork noticed a bald eagle sitting in the field and only hobbled away as the tractor came closer. The landowner called a friend who is also a member of the Woodbury County Conservation Board… who called SOAR volunteer and WCCB employee, Tyler. The eagle was hanging his / her head and Tyler suspected this eagle could be lead-affected and as soon as the eagle was loaded, he headed to meet up with Kay. The initial blood lead level on this eagle was ‘HI’ indicating fatal levels of lead. Hopefully this eagle was rescued in time. High calorie fluids and chelation medication started.

15 June 2016
Anthon has started flying 'some' in the eagle flight pen, a long ways from zooming, but is flying.

7 April 2016
Food not staying down, this eagle is back to high-calorie fluids and chelation treatment.

26 March 2016
Tyler has been caring for 'Anthon' for the past week and reports all is well. She is not wanting to eat on own so is being hand fed. Her mutes (raptor poo) are less lime green indicating she is getting rid of less lead. See below for video of hand feeding! Tyler says thanks to his supervisor, Dawn, for allowing him time during the day to check on this girl, and for allowing co-worker Theresa to help! Thanks to all that have helped him, including Brianna M and Maria K!

20 March 2016
A blood lead level re-check done and levels are down below 0.64 ppm, but still high. Chelation and fluid therapy will continue.