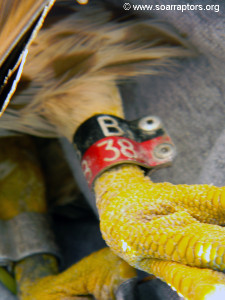 On 26 September 2013, our dear friend, Marla, received a call about a falcon running along the railroad track west of Knoxville. A Burlington Northern Railroad employee took the time to figure out it was a falcon and that it was banded and called the Iowa Department of Transportation who called Marion County Conservation and Iowa Department of Natural Resources staff. The message made it’s way to Marla. Many, many thanks to the railroad employee for taking the time and effort to help.

Since Marla had seem numerous kestrels in the area hunting on the large grasshopper crop this season, she was prepared for a kestrel. She was not planning on seeing a peregrine falcon head pop up from the rocks alongside the tracks!

Great rescue Marla! Miss B/38 is a hatch-year female peregrine that was banded at Dairyland Power in Alma, WI by Raptor Resource Project. She had a broken right humerus. Thanks for keeping her overnight and getting fluids in her!

4 April 2014
"Feisty" is in pigeon school and a soft release will be done in the next few days. A soft release is where the bird can leave from the flight pen when ready and food will be provided if and as needed until that raptor has departed from the area.

21 March 2014
This feisty falcon moved to a larger flight pen for live prey training in preparation for release.

26 November 2013
She is in the flight pen and flying to the high perch and in the last couple days has started going from the high perch to the far high perch and back and forth... She will need to spend the winter with us and wait for other peregrines to migrate north in the spring.

11 November 2013
The pin in her wing was removed this past Saturday and Dr Dirks x-rayed and gave the okay for her to go into a flight pen!

22 October 2013
Her bandages were removed three weeks post-op and all looks good. The incision has healed and can feel a nice calcified lump at fracture.

3 October 2013
B/38 visited Dr. Dirks and had her humerus pinned in surgery on 30 September. The next day she was eating on her own. This will be about an 8-week healing time on the bone.


Here is another picture of B38 at rescue from Marla. 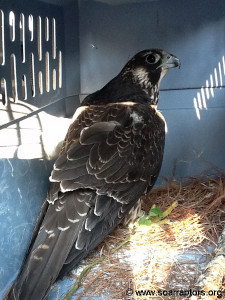 8 April 2014 – “Feisty Falcon” has a full belly and is able to leave or come and go as she pleases. When Kay took this picture, she was contemplating the situation. 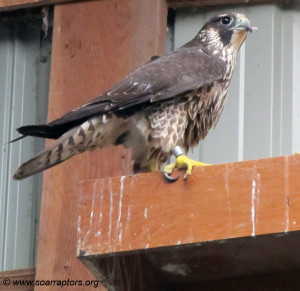 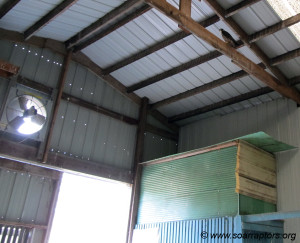