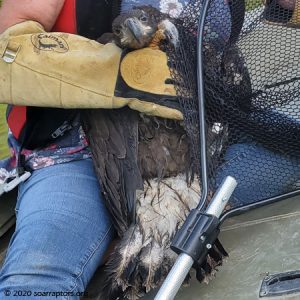 SOAR volunteer Deb was taken upriver to check on two downed eagles by the anglers that came upon them.

SOAR volunteer Deb said she wasn’t dressed for a rescue when the local conservation officer called. Instead of picking up her grandkids… she ended up on a fishing boat on the Raccoon River to assess two hatch-year 2020 bald eagles found by anglers. She obviously keeps her rescue gloves and float jacket in her vehicle!

Deb learned the riverbank eroded and the nest tree collapsed into the river. The eaglets were standing on pieces of floating tree trunk.

Even with adults present, the decision to rescue included:
** There was no way to get eaglets to a safe spot or makeshift nest.
** There was no spot for parents to provide food, no evidence of having been fed at that spot, likely why eaglets were thin.
** Rain was forecast for the next two days that would raise water levels, the eaglets would not have survived.
** The eaglets’ feathers are still in sheaths.

22 July 2020
These two eaglets are with two other hatch-year 2020 bald eagles honing flight and landing skills in preparation for release. The plan is to soft-release these four eaglets together. 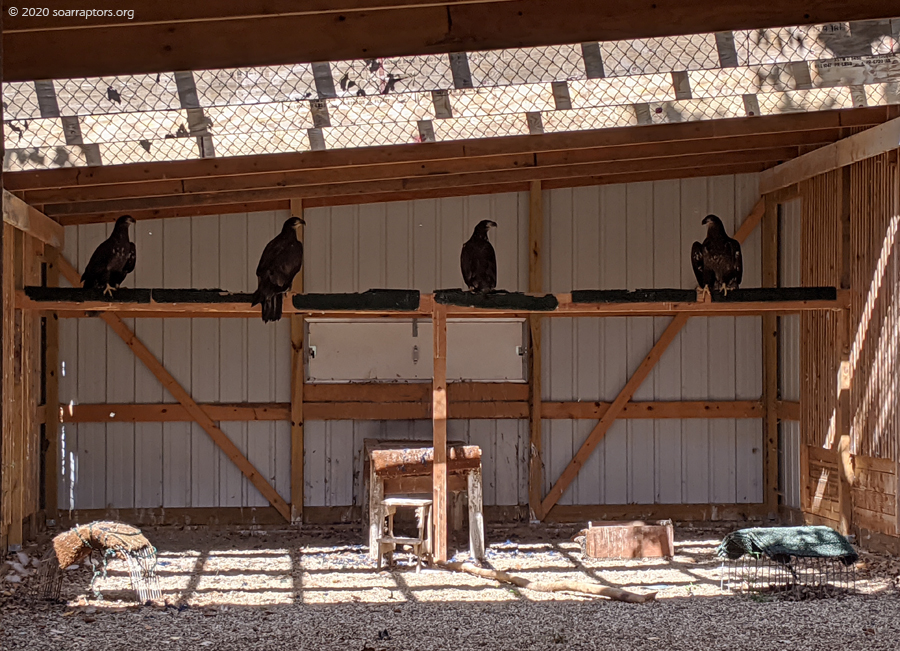 Four hatch-year 2020 bald eagles in the 20’x60′ flight pen to refine flight and landing skills in preparation for release. In this pen are Dawson 1 (male, the shortest of them), Dawson 2 (female), Sioux (female), and Parkersburg (female).