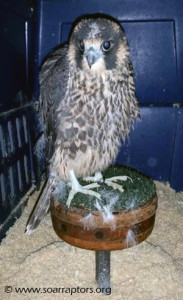 Two of the four juvenile peregrines from the Iowa Capitol nest were found on the ground… one each day. Capitol grounds crew called Pat S with Iowa DNR for rescue and both were admitted. Not sure if the extreme amount of rain received in the Des Moines area or if something “invaded” the nest box forced these two out of the nest box before they were ready to fly. They are both females.

12 August 2015
These peregrines will need banded before release. The Iowa DNR bands hatch-year peregrines in accessible nests in Iowa. The Capitol nest is not accessible. Each will sport a USFWS band on one leg and an Iowa band that is black over red on the other.

4 July 2015
Blood was drawn from both peregrines and both have only background levels of lead.