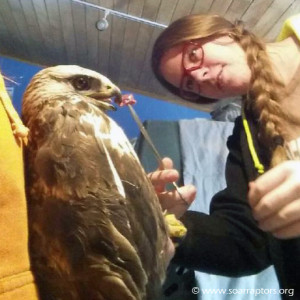 A winter-visiting rough-legged hawk was hit by a vehicle and rescued by Kay. This hawk doesn’t want to stand but can move toes, is keeping fluids and food down, and pooping.

2 February 2016
This rough-legged hawk had total paralysis on one side of the body and was humanely euthanized. 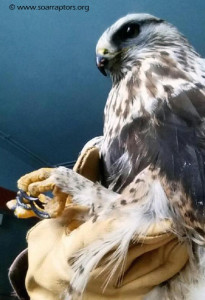 Rough-legged hawks nest in the Arctic regions of the globe and visit Iowa (southern Canada and much of the US) during the winter. The key distinguishing feature of rough-legged hawk are the feathers that extend to the ankle.