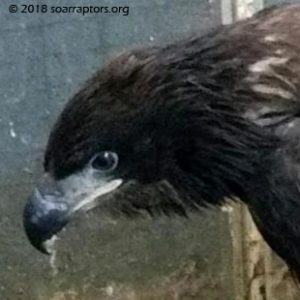 The Federal Warden from the Upper Mississippi River Refuge called about an injured bald eagle that he was en route to pick up… SOAR was not able to meet up with the warden, but Wildthunder could!

This hatch-year 2018 bald eagle was found near roadkill and was not able to stand at admit, so all are suspicious that this youngster had collided with a vehicle.

5 October 2018
This young eagle was moved to a 10'x20' flight pen and stands for periods of time. She is eating cut-up food on her own.