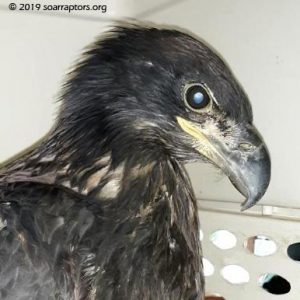 What an eventful week! On Saturday, the other eaglet – D32 that was rescued on Friday 7 June – from the nest near the Decorah Fish Hatchery was transported to SOAR. D32 had excellent care on Friday evening and Saturday morning from Raptor Resource Project board member and veterinarian Laura.

D32 is definitely impacted by black fly / buffalo gnat bites and is emaciated and dehydrated. As happens with birds in poor condition D32 has feather lice. Feather lice may crawl on you, but only in search of feathers. 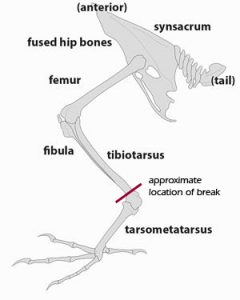 The biggest concern for D32 is that the tibiotarsus in the right leg is broken just above the ankle. Kay consulted with SOAR veterinarians and all agreed that pinning the bones together was not an option.

The only option, and it is a long-shot, is to align and stabilize the bones while D32 is under anesthesia. Surgery is scheduled to align the bones and apply an external stabilizer – like a cast.

Then we all wait.

D32 is on antibiotics and is eating cut up food.

13 June 2019
Kay assisted Drs. Riordan and Struve with surgery to straighten and stabilize D32's right tibiotarsus. The stabilization had to be from the outside (external) as both veterinarians agreed that there was no way to attach anything to the tiny piece of bone next to the joint. D32 did have an open owie near the break and a very tiny corner of bone was exposed. The leg was not stinky or pussy. The owie was cleaned, the bone straightened... then covered with an antibiotic pad and the leg "casted" in such a way to stabilize the bone but not be so tight as to reduce circulation to the toes. D32 will be in this cast for four weeks, then an x-ray check to determine if the two pieces of bone are forming a good union. All the veterinarians consulted on this think this is a long-shot, but a long-shot they were willing to take.

Now D32 needs to be kept calm, comfortable, and provided with cut-up food as standing on food to rip and tear is not something s/he needs to be doing now.

20 June 2019
D32 is remaining quiet and content. The splint / cast seems to be staying in place. Still being offered cut-up food only as do not want this eaglet to be moving about too much trying to stand on food to rip / tear. Kay will not worry about a weight or a beak depth measurement until possibly the next trip to the veterinarian (no the appointment is not scheduled). Limited handling means limited stress.

1 July 2019
D32 is still behaving like he is in the nest. He has made no indication of wanting out of crate. Now that D32 has progressed to eating cut-up food on own, the crate and bedding are cleaned frequently.

12 July 2019
This week has been eventful for D32. Tuesday, Kay and Savanna took D32 to the clinic for another x-ray. Dr Riordan was pleased with healing and said the cast should come off. The break did mend and there is additional calcification. As bones heal, the body deposits more calcium at the injury site. So far the calcification does not seem to be impacting D32's "ankle" joint. Thanks for the photos, Savanna!

Dr Riordan removed the cast, layer by layer, as Kay held D32. After one more day of crate rest and observation, D32 was showing the signs of needing a bigger space (more energy, wanting to stretch wings, gained weight). Thursday, Kay did put a bit of wrap on the right leg for some support and D32 was moved to a 10x20 enclosure. Currently, D32 does have a roomie - a HY18 bald eagle who is at a similar stage of recovery and is not ready for a larger enclosure. D32 and roomie will be monitored to make sure both are getting plenty to eat. D32's wrap will be changed in a couple days.

The bone has healed as good as we hoped for... but certainly not 100% perfect. Now comes slow recovery and rehabilitation.

25 July 2019
No change of scenery yet for D32. Kay reports that he looks good and that she saw him move toes on the right foot. That’s positive.

4 August 2019
Last week, D32 had his (this is still an educated guess on gender) wrap changed on the right leg. Why still a wrap? Just like a human who has had a broken leg bone, supportive material is still used for several weeks after the cast is removed (think walking boot). D32 still needs a bit of support as he moves about the 10x20’ enclosure. New roomie? Yes, he’s sharing quarters with our best “model eater,” education bald eagle - Decorah (FKA D20).

13 August 2019
Last week D32's beak measurement was done and it is official that D32 is a boy. He weights 8 pounds. The vet wrap was removed and not replaced. While D32 is still favoring his right leg, he can move his foot and use his leg. He is getting up to a perch in the 10x20 he is sharing with education eagle Decorah.

11 October 2019
What has D32 been up to and do you have recent pictures? D32 (and Decorah) are incredibly camera-shy and turn their backs to the door when Kay goes in to feed or freshen the water pans. Sorry, no new pictures. D32 continues to be a good eater and takes the short flights from the food and water pan to the perch. Kay is hoping to get the current 20x60’ occupants moved out in the next week or so and then move some eagles into the 20x60’ flight pen, including D32, for initial flight training.

2 November 2019
Remember that we've said D32 is incredibly camera-shy so rather than stress D32 (and Kay), we're not focusing on new photos, sorry.

The red-tailed hawks in the 20x60' flight pen had the soft-release window opened, but they are still coming and going.

As soon as these red-tailed hawks tell Kay they don't need any more support (not returning to the flight pen) then the plan is to move some eagles into the 20x60’ flight pen, including D32.

Remembers plans do not always go as planned.

17 February 2020
D32 is ready for release once area ponds are open AND there is a stretch of good weather. No, we're not sure when that will be. Yes, D32 will also have a soft release at SOAR. 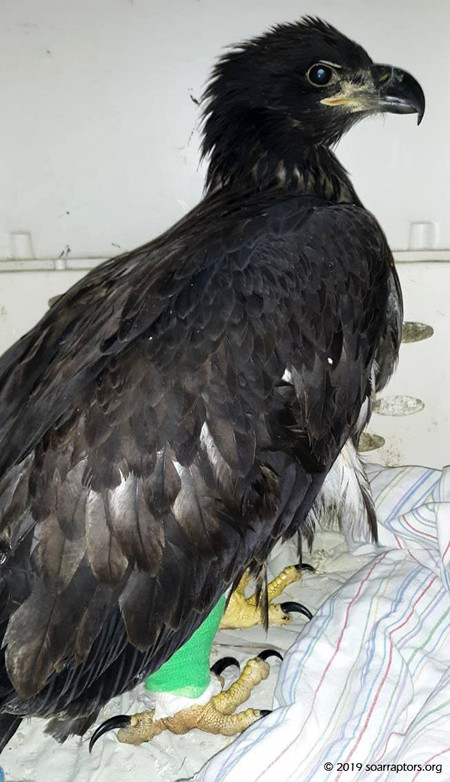 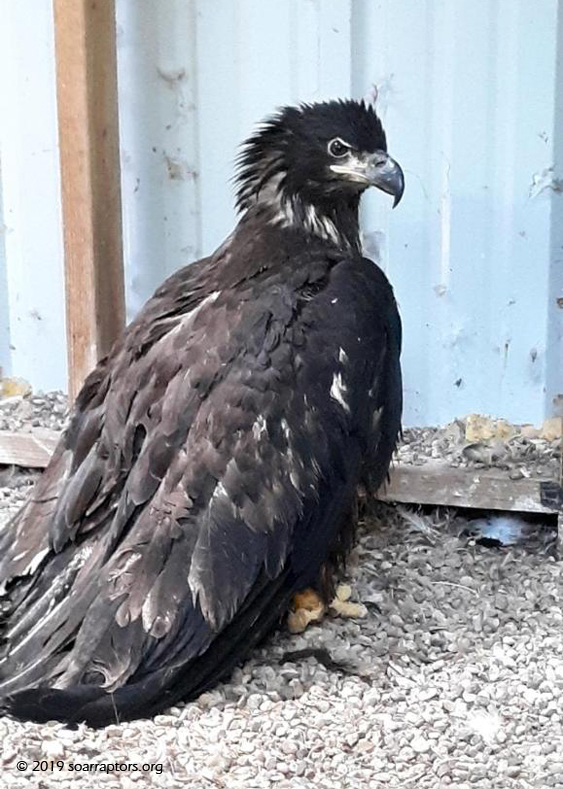 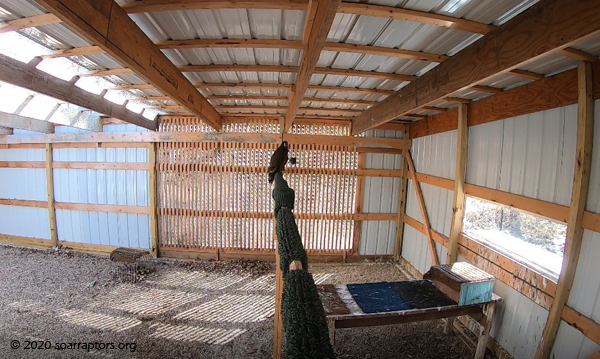