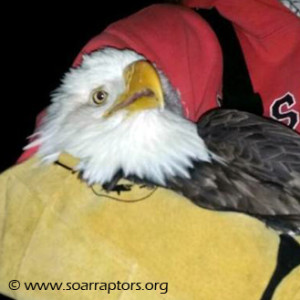 SOAR volunteer Deb certainly got her exercise! Concerned citizens called SOAR about an eagle they found down on the ground. Deb and the family that called hiked in about 15 minutes and Deb was able to rescue her without too much difficulty. The eagle is so weak, she can’t stand. Deb carried this 10 pound eagle back out. Kay met Deb last night to get her to SOAR as soon as possible.

6 February 2016
This eagle died this afternoon.

3 February 2016
Adel is now eating on her own and is still receiving chelation medication.

28 January 2016 late evening
Blood drawn and tested for a lead level and this eagle's blood lead level is "HI." The eagle weighs in at 10 pounds and has a female-size beak. High calorie fluids were given and this eagle received her first chelation medication injection. "Adel" is open-mouth breathing which is a symptom of lead in her system.

Click here to learn more about SOAR’s research on eagles and lead. 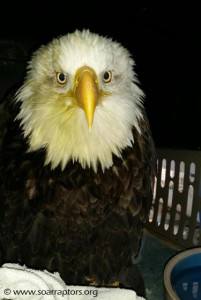 This female from near Adel was admitted 28 January 2016.

Adel is eating on her own!