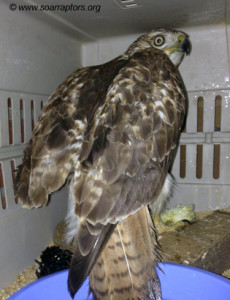 A juvenile red-tailed hawk was unable to fly and was rescued in Dallas County. As you can see in the photo… the left wing primaries are missing. Flight doesn’t happen without primary feathers. This hawk will need to be with us until he/she molts in new feathers.

Thanks to Laura for the rescue

29 March 2015
Look for a late summer release for this hawk... after a complete feather molt.


Two hatch-year 2015 red-tailed hawks were released at The Nature Conservancy Bison Day program on 7/11/15. One release was captured on video (it may have been this hawk).