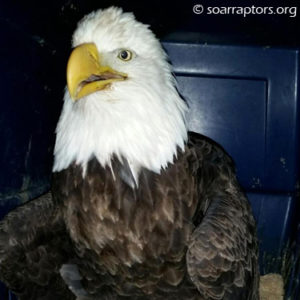 Admission Date: 22 December 2016
Outcome: Died, 25 December 2016
Location of Rescue: Near the town of Delaware in Delaware County
Cause of Admission / Condition: Grounded and unable to fly
Patient Status: Patient Archive

A wildlife rehabilitator (Tracy) in NE Iowa was called on the 21st by Manchester Trout Hatchery staff about a report of a bald eagle down and possibly stuck in something. Hatchery staff put Tracy in touch with the landowner whose son had found the eagle.

The eagle was over a half-mile down the hill and around a bend… it took two plows and a skid-loader to clear a path so folks could drive down close. The eagle was up against some vines, but not stuck. Tracy was able to pick up the eagle and put in her crate and then drove home. Tracy conferred with Kay and a plan was in motion to get the eagle some fluids yet that evening and for transport to SOAR on the 22nd. The eagle was able to stand but was open-mouth, raspy breathing and the wings were not tight to its body.

Kay did not have high hopes for this eagle to make it through the night with the description of the breathing. Yes, open mouth breathing is a symptom of high lead levels (lead mimics calcium and kicks the O2 off the red blood cell so it doesn’t matter how fast the bird breaths, they don’t get enough oxygen).

Well… eagle surprised us all and was alive the morning of the 22nd! The ‘pony express’ transport got this eagle to SOAR. Linette met up with Tracy where the eagle received more fluids and then transported to a SOAR intern (at Linette’s house) for the final leg of the trip. We were all pretty sure that this eagle had lead in her system between the breathing and the green mutes / poop in the travel crate. A blood lead test was done as part of Kay’s initial exam and… her blood lead level is higher than our diagnostic equipment can read. Chelation and more fluids.

In addition, the eagle was bleeding from her nostrils and trachea. Kay suspected this eagle ingested a poison or maybe has ulcers. The eagle was given a vitamin K injection to help thicken the blood.

26 December 2016
Kay reported that she died the afternoon of the 25th. The eagle could not keep down fluids and we suspect that organs were shutting down. Absolutely everyone involved did their very best for this eagle.

23 December 2016
Kay reports that the bleeding seems to have stopped, but one more vitamin K injection given for good measure, along with chelation, and fluids. VERY thin at 7.5 pounds. We're thinking female.