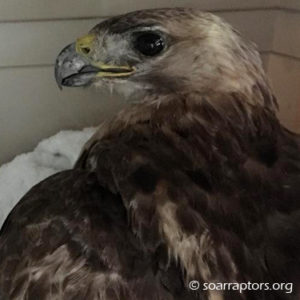 A concerned citizen in Dexter found a red-tailed hawk under a tree in their yard not wanting to fly away. Cassie to notice the very dark brown eyes indicative of an old bird. No fractures, but does have bruising in left wing. We suspect this hawk ingested some poison as the feet are clenched and mouth lining purple. Immediately started on fluids.

3 September 2016
Cassie has been manipulating the toes on left as he still wants to keep that foot balled up. She applied a soft interdigitary wrap to keep the foot open.

23 July 2016
Has been on fluids and his mouth lining color is improving. Feet still clenched but is trying to perch.