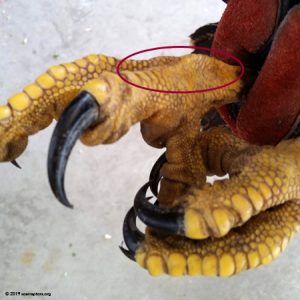 This hatch-year (HY19) bald eagle – DN9 – from the Decorah North Nest and famous from the Raptor Resource Project (RRP) nest camera fell to the ground under the nest on 6 June. RRP board member, Dave K, was able to locate and rescue this eaglet on 7 June.

DN9 was transported to SOAR on 7 June. Photos taken during an initial assessment during transfer to SOAR executive director, Kay Neumann.

During transfer Kay noted that this eaglet has numerous bites near the eyes and nostrils (nares), on the back of the head, and the skin on the throat below the lower beak was raw from buffalo gnats (AKA blackfly). What you see near the beak of this eagle are the bloody scabs from the gnat bites. This young eagle is emaciated, anemic, and dehydrated. Kay did discover once at SOAR that DN9 had feather lice. Birds in poor condition typically have feather lice. Feather lice may crawl on you, but only in search of feathers. Kay reported no fractures. Admit weight of 7.25 pounds. 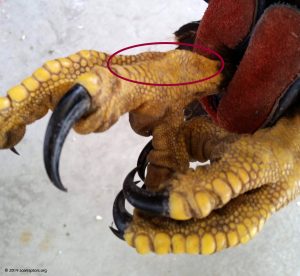 DN9 is dehydrated. See the tent of skin on top of foot? Pinch a fold of skin on your hand and let go. The skin quickly goes back in to place. When the skin ‘tents’ there is not enough fluid in the system.

Even though this eaglet is older than D33 (Hatchery nest admitted 5 June 2019), DN9 still needs more feathers to have successful flight. In the photos you can see tail feathers still encased in the sheath. The primary (flight) feathers are also still in the sheath and have growing to do. 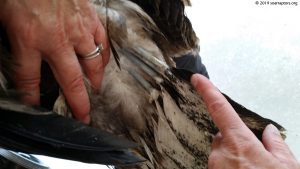 DN9 tail feathers still have some growing to do.

Kay gave DN9 fluids evening on 7 June and forcep fed some stew meat. Kay reported some good output 🙂 this morning. This eaglet is not yet interested in eating on its own. Today, DN9 will get more fluids and medication to treat for the lice.

11 June 2019
DN9 has been a "naughty" patient as not wanting to eat quail! Kay suspects DN9 had an upset stomach... pelleted a nasty smelling pellet complete with raccoon fur. :-/

Earlier on the 11th finally ate a quail on own.

Was given ivermectin to rid of the feather lice. Also on an antifungal as a preventative.

17 June 2019
Even though DN9 is still thin at 8.75 pounds, it was time to move to the eaglet nursery today. This eaglet has gained 1.5 pounds in 10 days and still needs to gain weight. The initial beak depth measurement says 'boy,' but Kay is thinking that DN9 is a female based on the amount of weight to be gained and that this eaglet is not done growing. DN9 has the left inside talon painted teal green (fingernail polish).

25 June 2019
Two of the three juveniles currently in the "eaglet nursery" are perching! We *think* the perching eaglets are DN9 and D33.

1 July 2019
The nursery eaglets have discovered the kiddie wading pool and are bathing.

20 July 2019
The eaglets in the nursery (D33, DN9, Allamakee, and Calmar) are ready to move to the next size up flight pen that will allow for short flight. The weather has other ideas. It is just too hot to move the eaglets and would be stressful. Better to keep them where they are at with a constant breeze, shade, and cool water in their pool. The nursery eaglets are eating and pooping, flapping, bathing, and looking good.

25 July 2019
The hatch-year 2019 bald eagles in the nursery have moved to the 20’x60’ flight pen! D33, DN9, Allamakee, and Calmar moved on 23 July and can now “start their engines” so to speak. This flight pen is large enough to allow for those necessary short flights that build muscle, stamina, and skill in landing.

30 August 2019
Moved to the 100' flight pen to build stamina and socialize with all ages of bald eagles. 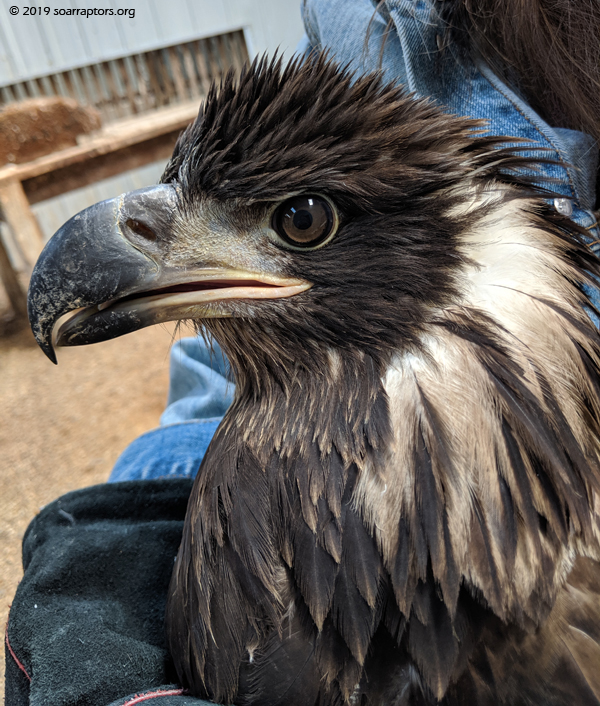 23 July 2019 moving day to the 20×60′ flight pen. This is DN9. White on DN9 is because of the gnat bites and her scratching she lost feathers. She is all healed, but now regrowing down and feathers.