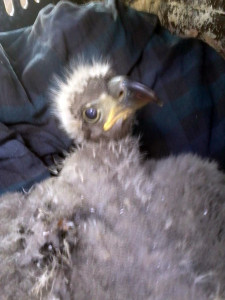 The thunderstorms / high winds over the weekend of 14-15 April took down an eagle nest in Dolliver State Park (SE of Fort Dodge). According to personal communication with the Des Moines National Weather Service office, there were thunderstorms in the area the evening of the 14th into the early hours of the 15th, with winds gusting to 38 mph. However, Webster County was under a High Wind Warning on Sunday the 15th. A high wind warning means that winds are long-lasting and greater than 40 mph.

A park user came upon the downed nest on the 17th and notified park staff. After a few phone calls the park staff were in contact with SOAR.

After consulting with Raptor Resource Project and The Raptor Center, we learned that unlike some other raptors, eagles will not accept a replacement nest once nesting and rearing activities are in full-swing. Adult eagles may feed a brancher on the ground, but would not feed a young eagle the size these likely were.

With that knowledge, Kay asked park staff to look for any surviving eaglets and would make arrangements to get the young’un to SOAR. With a “rescue kit” just in case any of the eaglets were still alive, park staff found the nest debris and one eaglet still alive and two eaglets that did not survive.

For now, the eagle is at SOAR until a better and more natural solution can be found / determined.

The help of Dolliver State Park staff is greatly appreciated!

30 June 2012
After consulting with other rehabilitators with baby eagle experience, it was determined that when he was flying in the flight pen with ease, we needed to do a soft release. This meant setting up a feeding station on the roof of the adults pen. He could still see and hear the adults and he would have food available, if needed. The young eagle had been easily navigating the flight pen and was time for a pre-release exam. The exam indicated the eagle was healthy, fully feathered, and weighed in at 7.25 lbs. Released at SOAR!

As with all the care provided for this young eagle, this release was planned with his best interest in mind and, it was done to try and minimize any human influence on this still growing bird... low stress and near easy food sources of ponds, creeks, and rivers... several of which are drying up and makes for easy fishing.

14 June 2012
The young eagle is branching with the adults and making short flights. See photo below.

30 May 2012
The eaglet is now perching! See photos below of the "honked off" foster parents. They are so protective of "their" baby.

14 May 2012
This young eagle is standing up most of the time and is starting to tear his/her own food. My how fast they grow!

4 May 2012
The eaglet is standing and flapping! When comparing this one to the three in the Decorah nest... this one is about the same development as the oldest eaglet in the nest. No down is visible and feathers growing in.

30 April 2012
The eaglet has moved himself quite close to the people door and has the adults concerned. It is very good to see that the eaglet is displaying appropriate behaviors, for example, when the adults give an alarm call, the eaglet flattens himself to the ground.

25 April 2012
After consulting with Marge at Raptor Education Group (REGI) in Wisconsin about the best way to care for this first-ever eaglet at SOAR... since the eaglet is eating well, it will be moved in with adult eagles (Spirit and Liberty) for fostering. Discreet monitoring will be done to make sure the adults accept the baby and will feed it. Human contact needs to be kept to the absolute minimum to prevent imprinting.

19 April 2012
The eaglet is much perkier today and is able to hold his/her head up and look around. The eaglet is in a crate and can watch Thora! 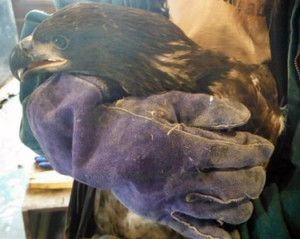 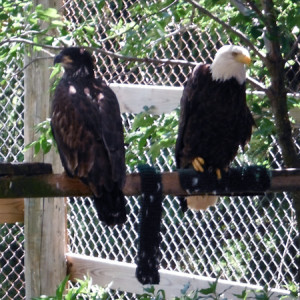 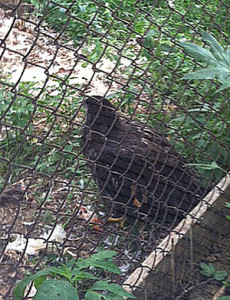 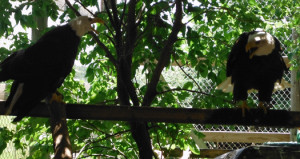 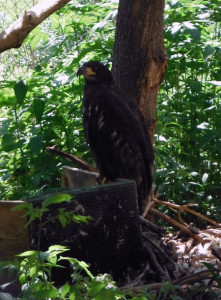 25 May 2012… hard to take photos as the foster parents are very protective. 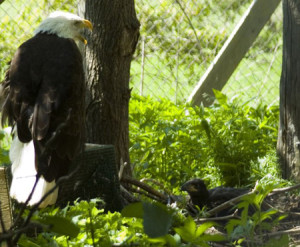 Watchful foster parent, can you see the nestling on the ground? 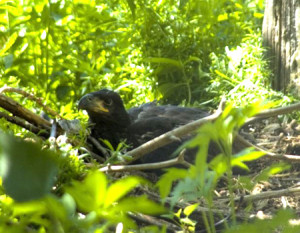 The nestling eaglet is growing! Photo taken 8 May 2012.