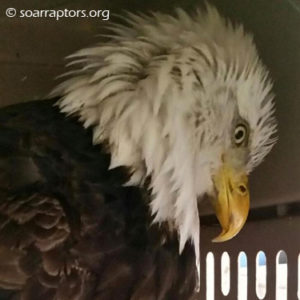 Animal Rescue League of Iowa staff rescued this bald eagle from the Des Moines River ice near Euclid Avenue. The rescuers reported that the eagle was very uncoordinated. Polk County DNR officer took the eagle to SOAR volunteer Deb who had several admits to go to SOAR.

The initial exam of this eagle indicated she was thin (weighs only 8 pounds and is thin), had a blood lead level higher than our diagnostic equipment could read (greater than 0.65 ppm) so she has an extremely high level of lead in her system, and she has no fractures. She was started on chelation treatments that evening to begin removing the lead from her body. She was given high calorie fluids.

29 May 2017
This female bald eagle is the only one of 14 bald eagles SOAR admitted from December 2016 through March 2017 with elevated lead levels to have survived. She was released at a private gathering of rescuers on Memorial Day 2017 at Jester Park Lodge in Polk County. Iowa DNR Officer Eighmy had the honor of releasing.

Unfortunately, we must repeat ourselves... if you hunt, please hunt lead-free. If you fish, please fish lead-free.

8 March 2017
Euclid was weighed and wormed before being moved to the 100' eagle flight pen! She weighs 10.5 pounds and could stand to gain more.

26 December 2016
This eagle has been off chelation meds for two days and a re-check of her blood lead level done this afternoon says she still has lead in her system (0.496 ppm) and is back on chelation.

21 December 2016
This girl is still with us this morning. She has better balance and is able to hold her head up. Chelation continues. She had high-calorie fluids and a few bites of meat this morning. We are far from out of the woods. 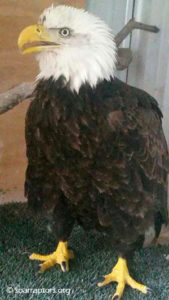 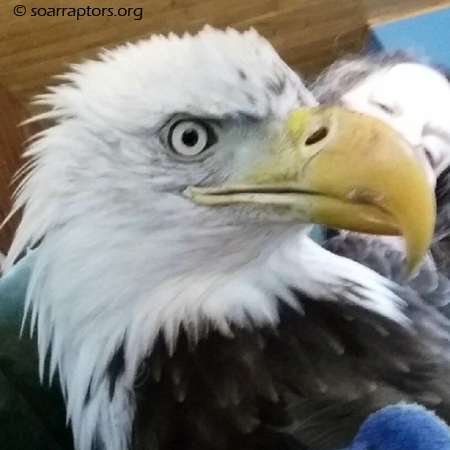