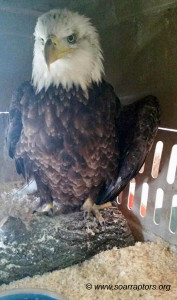 A 4-year-old female eagle was transferred to SOAR from the ISU Wildlife Care Clinic (WCC) today. While at WCC, initial blood lead level (BLL) was done and came back indicating background levels of lead. We’re suspecting ligament / tendon damage in the left wing as she has not much control to the wingtip. Notice there is still a hint of black on her beak.

Thanks to Franklin County Conservation for the rescue and transport to WCC.

18 March 2016
Visit the Franklin County Conservation Facebook page and look for a video posted today of the release!

14 March 2016
Due to the severity of the fracture in her left humerus and how it healed, her flight is not as 'picturesque' as we would like to see. However, she is ready to be a wild eagle again and was released today at Maynes Grove Park in Franklin County.

26 February 2016
This eagle is now doing laps in the 100' flight pen with ease and we are working with Franklin County Conservation staff to have a small gathering for her release.

26 October 2015
She is now taking multiple laps in one flight!

2 June 2015
She is just beginning to fly and can flies one length only.

8 March 2015
The wing issue was persisting, so she visited Dr. Dirks last week for an x-ray of her left wing. She has a broken humerus condyle (there is a break in the lower humerus that extends underneath one of these knobby projections). Dr. Dirks indicated her prognosis for flight would not be good, even with surgery. This eagle is back at SOAR and is actually holding her wing in a better position than at transfer.

24 February 2015
She weighed in today at 11 pounds! She still has an issue with her left wing, but NEEDED out of an ICU crate.


This eagle was released with a small gathering of Franklin County Conservation staff and board members plus members of a local 4-H Shooting Sports Club. This almost 6-year-old eagle beat the odds and is flying after a year of rehab. May she have an easy eagle life from now on! Here are a series of photos from her release! She still has that bit of black on her beak, maybe she always will?

Recovered Bald Eagle Release at Maynes Grove This last Monday, the 14th of March began dreary, but ended with a flash of brilliance. Our staff in conjunction with the conservation organization S.O.A.R. (Save of Avian Resources) released a bald eagle back to the wild at Maynes Grove Recreation Area. The injured eagle had been recovered in Franklin County in February 2015 by conservation staff, and was brought to S.O.A.R shortly thereafter for medical attention and rehabilitation. Now just over a year later the 4 year old female was ready for release. With a small gathering of silent observers in attendance the recently rehabilitated eagle emerged from her transport crate and took flight back into the wild soaring across the pond and into the western portion of Maynes Grove Park. After the release, Linette Benard, volunteer for SOAR, gave a small program about the Franklin County Eagle’s rehabilitation and the effects of lead on our avian populations. For more information about S.O.A.R. or the rehab or the Franklin Bald Eagle please visit: https://soarraptors.org/patients/franklin-bald-eagle/ .