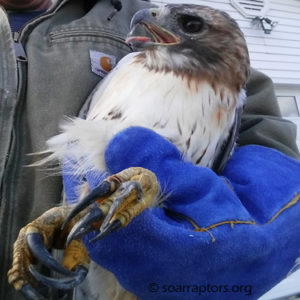 A landowner north of Fort Atkinson in Winneshiek County noticed a hawk sitting by the side of the gravel road on his way to town for lunch… but the hawk was in the same place when he returned. He made a couple phone calls and with the help of a friend was able to safely rescue this hawk and place in a dog kennel until SOAR could transport. Look at those dark brown eyes! In red-tailed hawks that is a sign of age.

At first, we thought there was a left wing injury as the hawk would step on the wing. Kay could find nothing wrong with the wing. The hawk does have a distended belly that was not resolving. He (guessing a male) is perching, eating, and pooping… though the poop / mutes are not yet normal. Not sure if we have an intestinal blockage or some nerve damage / spinal issue.

16 November 2016
The hawk is losing movement in his feet; the nerve damage seems to be getting worse not better. The hawk died later in the day.

1 November 2016
He is eating well so we will give some time to see if there is improvement. We're now suspecting a lower spin injury.