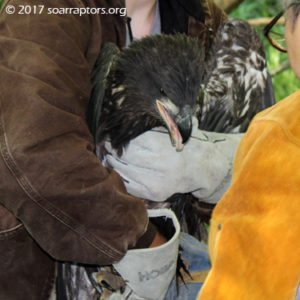 A Marion County eagle enthusiast watches several raptor nests around Lake Red Rock. She got word to SOAR friend Marla that the Gladys Black Eagle (GBE) camera nest tree was broken and the nest is on the ground. No one is exactly sure when this event happened as when the nest tree leafs out, it is hard to see the nest from IA-14. Marla knew there were eaglets in the nest and thought only two. Marla stopped early the morning of the 5th to assess the situation. She kept her distance so as to not disturb any adult eagles nearby.

This is an established pair of eagles that nested in this tree in the 2011 season… they built a new nest in 2012 about 1/2 mile away as the eagle flies, but returned to using the ‘original’ nest in 2015 after the nearby nest tree blew down. This pair has defended territory for over seven years. Since there had not been any weather events in the week leading up to the discovery of the downed nest AND considering the size of this cottonwood… we’re suspecting that part of the tree simply collapsed.

What she found was one young eagle on a lower limb in the nest tree. As she quietly scouted further, she noticed another eaglet in the corn field. This one appeared to be favoring one wing, and did not fly away when approached. The only way to assess if rescue was needed was to rescue… so that’s what she and Marion CCB Park Technician Alex did! Alex wants to work with animals in his career so Marla had him put on the Carhartt jacket and welding gloves and talked him through the rescue. Marla said he did great. Thanks to SOAR volunteer Deb for picking this eaglet up in Prairie City and taking to SOAR.

19 July 2017
Has been in eagle flight pen for a couple weeks now. Is on high perch and can do one down-and-back, but then rests.

6 June 2017 later in the day
There was confirmed sighting of two eaglets at the nest tree site, along with the parents.

6 June 2016
Kay reports this eaglet is favoring the left wing, no fractures on the wings or legs, and is a bit thin. Marla checked on the sibling again this morning and found perched on a snag near the edge of the backwater.

5 June 2017 afternoon
Marla went back to the area with her binoculars to check on the sibling. An adult was flying nearby so she quietly left. 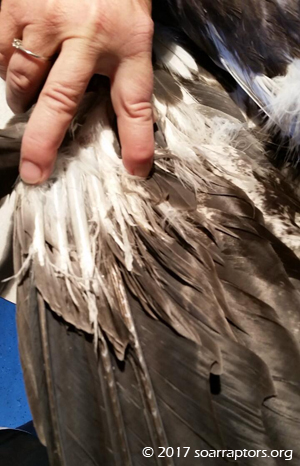 Photo from 12 June shows quite a bit of primary yet to grow in. This may well be eaglet #3 of this pair. She is in pen with Mt Ayr, adult female. The eaglet is not showing any interest in flying or flapping.