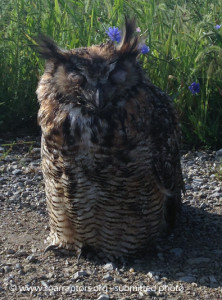 GHO #3 – this owl is from Madison County, smells like a skunk, very, very, thin and has injuries that indicate this great horned owl was probably hit by a car. Plus this owl has lice and flat flies…

27 February 2015
Time in the flight pen can also reveal when there is lingering injury that stubbornly doesn't heal. This owl had some tissue damage on the wing and that tissue died, leaving no good attachment point for feathers. This owl was not going to be able to sustain flight without those feathers and was humanely euthanized.

15 December 2015
This owl is in the flight pen working to strengthen muscles and hone flight skills.

11 September 2015
Flat flies have been picked off and the owl is receiving treatment for lice and other parasites.