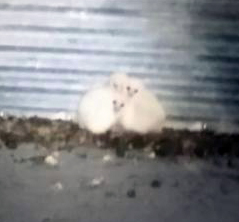 A Guthrie County farmer checked the inside a grain storage bin (he was about to unload corn into the bin) and found fuzzy bird residents. He made a quick call to the local Iowa DNR conservation officer who called SOAR friend Cassie. Thanks to the farmer for checking the bin first!

Yep, you guessed it! Barn owl babies! There are a total of five young. The only chance for these young to survive was to remove them from the grain bin and take them to SOAR. One of the owlets is quite small, others are bigger.

Yes, it seems odd for a pair of barn owls to nest this time of year in Iowa… but multiple broods are part of the “make up” of barn owls. Had the farmer not needed this grain bin, this brood would likely have survived.

25 May 2015
The hack tower at Whiterock Conservancy cannot be used for osprey as there is an eagle nest too near. The tower was repaired and renovated for a soft release for the barn owls. Four of the five were placed in the tower on the 25th. The tower was deemed too small for all five, so one of the females was held for release at SOAR.

21 January 2015
All these owls will be ready for a spring release.

17 November 2014
If this were spring and these baby barn owls were in their nest... they'd be about ready to branch. This is not the time of year to be a fledgling in Iowa. These babes will need to wait for spring to take their wild "first flight."

13 October 2014
Kay has been hand feeding these young owls and they will soon move in with the adult barn owl.


Why are these babes of such different size? Most raptors begin incubating when the first egg is laid, so the youngest could be many days apart in age from the oldest. This is called asynchronous hatching and is a natural adaptation where if food sources are scarce then only the strongest young survive to fledge.

Our hope is that our education barn owl will take over parenting / feeding duties so these young barn owls will have limited contact with humans!

It is nice to hear of another nesting pari of barn owls in Iowa, even if their nest needed to be “relocated.” Barn owls are listed as an endangered species within this state primarily because of loss of nesting habitat and large grasslands for hunting.

**If you find owls like these in a grain storage bin, Pat Schlarbaum with Iowa DNR Wildlife Diversity Program, has plans for a nest box that can be put on the OUTSIDE of a grain bin.