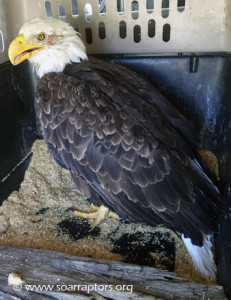 Cassie rescued an adult female bald eagle who likely had a mishap with a vehicle in Greene County. This female is missing primaries on both wings (not sure how that happened), has some head trauma, but the worst part is that she can’t see very well. Is getting antibiotic drops.

1 November 2015
Her vision has greatly improved and she has been moved to the flight pen to begin strength training.