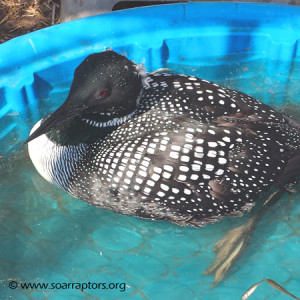 This is Iowa… we might see a common loon during migration or if we vacation in northern Minnesota, Wisconsin, or Michigan. To receive a call that someone has rescued a loon, wow, really?

The loon was rescued by concerned citizens in SE Grundy County from a dry road ditch. Our guess is that the ditch looked like water for the loon to land. Loons need to be in water to be able to take off.

Learn more about loons from Cornell Lab’s All About Birds site and the Minnesota DNR.


Kay uses a horse leg wrap with Velcro straps to keep the loon still while weighing. 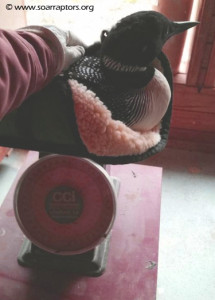