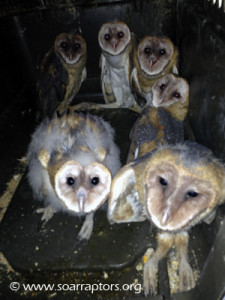 A farmer in Guthrie County went to stir the corn in one of his grain bins and out flew a barn owl. He said he’d seen one owl fly out of the bin before, but didn’t think anything of it. This time, he opened the roof hatch and saw 6 young barn owls. These owls were immediately rescued. They won’t need us for long… two are already wanting to fly.

12 August 2015
Food placed in the tower is disappearing... need to place trail camera inside to confirm who is taking / eating.

3 August 2015
The owl's access hole to the outside was opened up. The owls are free to come and go. Supplemental food will be provided until we are assured the owls are no longer needing.


Video from inside the hack tower…