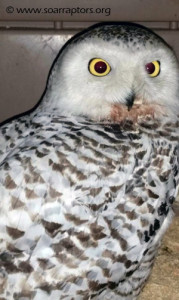 Thought we were not going to see any snowy owls needing us this winter, guess we thought too soon. Unfortunately. A badly injured female snowy owl was rescued in Hamilton County and brought to SOAR the morning of the 24th. She has a broken left wing and part of that wingtip is missing. She also has a broken left leg. The federal band she was sporting on the broken leg has been removed to help relieve swelling. (From the band number, we know she was banded in 2014 as a hatch-year bird visiting Illinois.) The biggest issue this girl faces is she is severely underweight. From the condition of her feathers and the amount of healing of bone, we’re suspecting she’s been on the ground for at least one week and likely without food. She weighs about half of what she should. When patients are this underweight and haven’t had food processing through their digestive system… the situation is touch and go… she’s received high-calorie fluids but has not been able to keep all the fluids down. In the photo, she was offered bits of fresh pigeon, those morsels did not stay down, so back to fluids only. You don’t know if solids will stay down until you try.

2 June 2015
She can now put weight on the mended left leg, but can't move the toes very well. She has had her West Nile Virus vaccination and has moved to snowy owl summer quarters. She is not releasable due to missing the tip of left wing. She will be transferred to a USFWS permit holder.

8 April 2015
Leg unwrapped, wound healing nicely, did not wrap again. Owl not wanting to put much weight on that foot/leg yet.

29 March 2015
Eating on own, has pelleted, swelling is down in broken leg and that foot, so can now splint and wrap that leg.