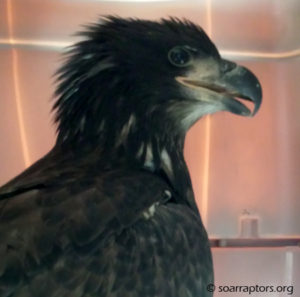 A 2016 fledgling bald eagle somehow got separated from its adults and spent several days on the ground. Landowners were concerned and contacted the USFWS Wildlife Officer in McGregor for help.

The landowners were willing to rescue and the Federal Warden transported to Oelwein for the first leg of this young eagle’s trip to SOAR.

At 9.5 pounds and quite thin, we are thinking female. Also no fractures! Once she figured out we had food to offer… she was all about eating!

Thanks to the landowners and Nick!

9 August 2016
Eating on own again... but does not have a typical eagle appetite yet.

23 June 2016
I received a text from Kay today that says it all, "Sassy-pants Harpers Ferry weighs 11 pounds and still thin and is now in the flight pen." Sounds like she needed a bath. She managed to get sticky gunk on her head! There is always one in the bunch...


Here’s a photo right before she was moved to the eagle flight pen, the first time. 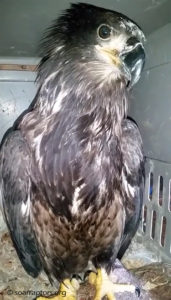