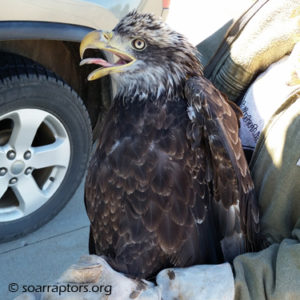 An Iowa DNR biologist that works in the Upper Iowa Wildlife Management Area saw, tracked, and rescued a juvenile bald eagle on the 16th.  Transport was arranged on the 17th.

Kay thought during her initial field exam that just the right radius was cracked. A closer inspection when at SOAR revealed both the right ulna and radius were cracked, but bones were in line and under the skin. There was much bruising on that entire wing. The wing was stabilized so nothing happened to the healing bones. This eagle is not thin and has an attitude! He is also uniquely marked with a white tail but brown and white head.

See this post (https://soarraptors.org/2017/03/releases-to-help-with-research/) about "Releases to help with research"

14 October 2016
The wrap is off the wing and all looks good. He'll need some time in an ICU crate before is moved to a small flight pen. 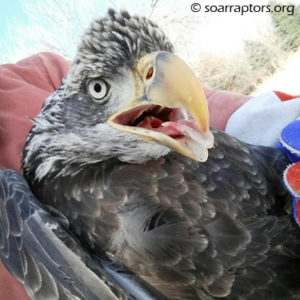