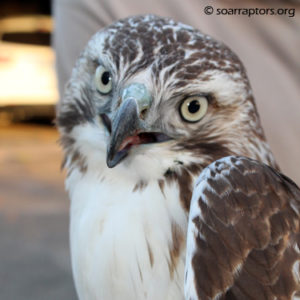 A concerned citizen rescued this hatch-year 2016 red-tailed hawk (HY16 RTH) along IA-92 and delivered to an Iowa DNR biologist that works in the county, who delivered to SOAR friend Marla. This young hawk has a pretty bad break in the right humerus.

20 December 2016
This red-tailed hawk was holding the wing in a good position so it was time for rehab in the flight pen. The hawk had been in the flight pen for a few days and upon evaluation the hawk could not fly because the bone did not heal with good alignment. This hawk was euthanized today.