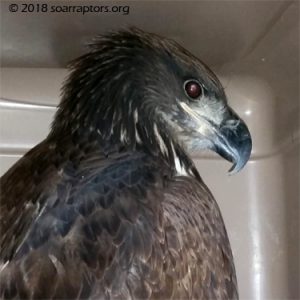 SOAR received a call from Winneshiek County dispatch with a report of an eagle along the side of IA-24. The calling party even had an address and last seen location. The problem is that SOAR’s usual go-to-rescuers in the Decorah area were not available. Thank you to Jeff K from Fort Atkinson for his willingness to “go see” if he could find the eagle. [Backstory is that he’s rescued other raptors over the last couple years, so we called!]

Texted Jeff all the details we had… he took off with a crate and a heavy blanket. In a short amount of time, Jeff called back to say that he had the eagle in the crate and would take it home — off to Fort we went!

This hatch-year female bald eagle has sensitivity in both wings and hasn’t missed many a meal, weighing in at 10.5 pounds. She has much bruising in her wings and torso.

11 October 2018
After being hand fed for a week, she has now 'graduated' to eating cut-up food on her own. She is still in ICU so she doesn't try any dramatic moves just yet.