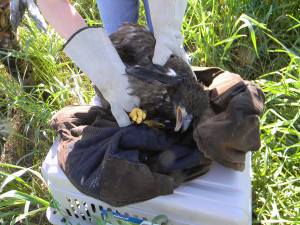 Jasper County eagle nest watchers reported that the nest had collapsed in the wildlife area north of Rock Creek State Park and an eaglet needed rescuing. SOAR friend Marla got the call late Saturday evening and prepared for a daytime rescue with her friend John and his kayak!

One eaglet died in the collapse and the other eaglet was rescued and transported to Des Moines where it was picked up by SOAR.

27 June 2013
An update on "Jasper"... Kay and friends opened the gate on the hack tower on the 26th. "Jasper" flew out and made a nice arc and landed on the ground. Even though he was more than ready to leave the tower, his muscles weren't ready for flight. "Jasper" is back in the 100-ft flight pen at SOAR for flight practice. The eaglet did have a slight droop to one wing at admit, but that appeared to have resolved or so we thought. He just needs more time to rehab.

17 June 2013
Eaglet was taken up to the hack tower... A bit later than we wanted, but waited for storms to pass. "Jasper" weighed in at 8 lbs before being carried up to the tower.

11 June 2013
The osprey hack tower at Whiterock Conservancy is prepped for this youngster. Very soon he will be placed in the hack tower and hacked out just like the osprey have been!

4 June 2013
This youngster weighs in at 7 lbs and at this time we think is a male - but reserve the right to change our mind. He is still wanting to be fed and is eating LOTS! He'll stay in ICU for a bit. 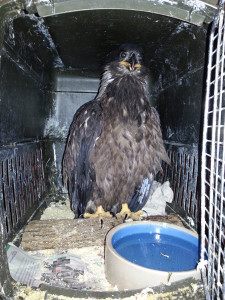 By 3 June 2013, Jasper was all dried off and in an ICU crate for observation.

This segment from Iowa Public Television show Iowa Outdoors tells Jasper’s story. Click here to see the segment of the show about SOAR.