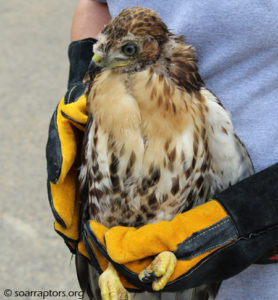 A hatch-year 2016 (HY16) red-tailed hawk was rescued on the shoulder of Jewell Dr and Co Road T15 near the Lake Red Rock Visitor Center. This young hawk was covered in gnats with irritated skin where feathers on head and leg are not growing. SOAR friend Marla suspects fledged too soon…

27 May 2016
This young hawk was transferred to Cassie (first leg on the "pony express") and will continue on to Kay. The hawk was given wormer medication... eliminate internal and external parasites and Neosporin on injury sites.