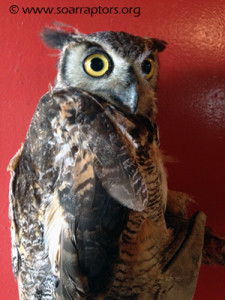 A homeowner in Kellogg found an adult great horned owl in the ditch by her house, rescued, and met up with Cassie. Nothing broken, no maggots (nobody likes maggots), and is quite thin.

1 October 2015
Evan after much TLC, this owl was not recovering from injuries and was euthanized.

28 June 2015
Is gaining weight. Wish she would bathe, but appears she either doesn't feel well enough for a bath yet or likes the grunge look!

22 June 2015
The owl ate on her own this morning. Cassie suspects she also has avian pox. The owl will need to stay isolated until the pox clears.

20 June 2015
Kay suspects electrocution because of how the feet and legs look, see photo below. Cassie reports that the owl has kept fluids down. 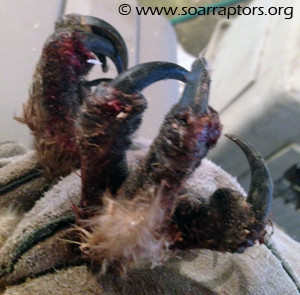