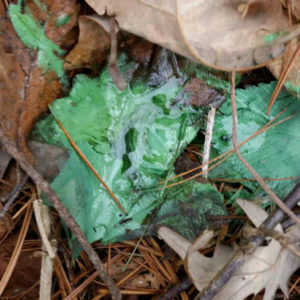 While I (Linette) was waiting to pick up the injured eagle from Wildthunder W.A.R.S., a text message came in from the Warden in Winneshiek that he had a very sick eagle and wanted to know if I could relay…

He also texted me pictures of the mutes (bird poo) that was on the ground where the eagle was laying. “Oh no,” I thought.

23 February 2017
This bald eagle was transferred to Kay (along with the Oelwein eagle and juvenile swan from Marion County) in Ames. When moving to Kay's vehicle, this eagle was open-mouth breathing. This eagle was dead when she got to SOAR.

We know this eagle has extremely high lead levels by the color of the mutes and the labored breathing. A liver tissue sample will be sent to the diagnostic lab. This eagle weighed 11 pounds, another female.