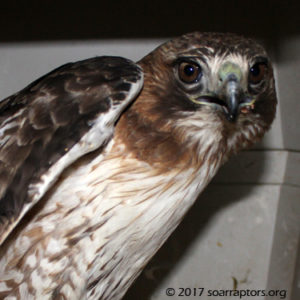 Admission Date: 7 May 2017
Outcome: Died, 11 May 2017
Location of Rescue: south of Knoxville
Cause of Admission / Condition: Grounded and unable to fly
Patient Status: Patient Archive

Concerned citizens found and rescued an adult red-tailed hawk that was unwilling or unable to fly and called SOAR friend Marla. While there may be an issue with his left wing, her concern now is getting the hawk stable with fluids as is quite lethargic, a bit dehydrated, and very, very hungry.

11 May 2017
Treating symptoms that appeared to be an organophosphate poisoning. A pellet was released on 10 May that appeared to be a blue green color with an odd covering, coming to the conclusion that he had ingested a rodent that had ingested a large chunk of rodent poison. This hawk was declining rapidly even with supportive care and medication and did die on the 11th.

No matter a label or provider of poisons... poison is poison! No matter what kind. Need to control rodents... snap traps.