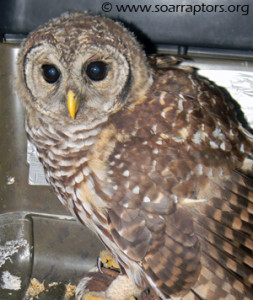 Knoxville residents had been watching a family of barred owls around their neighborhood and noticed that one of the young owls was not “right” and called SOAR friend Marla. Many theories were speculated about what might have happened, but after observation from Marla and the homeowners, it was determined that this youngster just couldn’t keep up with the other two fledglings in the nest and the parents were not feeding him. Our guess is that he may have been much younger than the other two and left the nest too early.