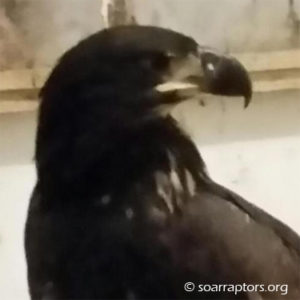 A fledgling bald eagle was grounded, rescued, and taken to wildlife rehabilitator in the area. This juvenile was taken to Dr. Dirks for an x-ray. The x-ray revealed no fractures, but had cloudy lungs. Dr. Dirks said the cloudy lungs were a result of a fungal infection – aspergillosis. The juvenile was started immediately on an anti-fungal to get that cleared up!

30 December 2016
This juvenile is looking better.

1 October 2016
Lakeside was moved to the eagle flight pen.

9 August 2016
Anti-fungal medication has been completed, then more time in ICU, but is now in a 20x20 flight pen.